While I had heard of Bundini before reading this book, mainly through reading about Muhammad Ali, I never realized just how much Bundini was a part of the Ali legend.  Not to mention how exciting a life Bundini lived.  Here is my review of a terrific biography of the man. 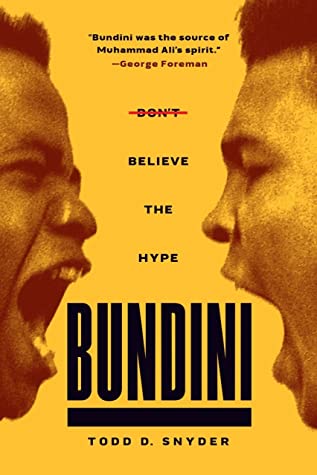 Drew “Bundini” Brown’s life is one that not many people, even boxing fans, can say they know well.  That doesn’t mean it was boring – indeed, the man who was in Muhammad Ali’s corner for most of his career and his most legendary fights lived an exciting life that the author of this book, Todd D. Snyder, says that it is “once that not even the best Hollywood writers could have invented for the silver screen.”

Drawing off of many interviews with Bundini’s son, Drew III, as well as thorough research and stories from other people, a reader will be drawn into the world of Bundini from his humble beginnings in Sanford, Florida where he ended up being raised by his father when he and his mother separated to Harlem all the way to his poignant death in a hospital after falling at a run-down motel in California where he lived his last years penniless.

In between all that, Snyder paints a terrific picture of a man who was a hustler, servied in the navy as a porter, had a wonderful gift of gab, rebelled against social norms by marrying a white Jewish woman who had as big a rebellious streak as her husband and through his street smarts, worked for one of the many businesses in Harlem owned by boxing legend Sugar Ray Robinson. From there he connected with a local boxer who provided him a job and that introduced Bundini to the sport and led him to Muhammad Ali.

Ali took a liking to the young man who had not only was a hard worker, but had a wonderful way with words, much like the up and coming heavyweight boxer.  It turned out to be a match made in heaven as Bundini was his principle motivator as well as poet. The most well-known of his phrases was “float like a butterfly, sting like a bee” but it was far from the only mark that Bundini would leave with Ali.  Their relationship, like any other relationship of any type had its ups and downs – Ali would fire and rehire Bundini far more often than George Steinbrenner would with Billy Martin – but they would remain forever linked together.

What makes this book such a fascinating read is not just the story of Bundini, as great as it is, but Snyder’s masterful touch of taking just stories from Bundini’s son and other people in his life and weaving it together into such fantastic prose. This is true for all aspects of Bundini’s life, not just his time in Ali’s corner.  There was a special bond between Bundini and Drew III that is brought out in Snyder’s writing. Bundini called his god “Shorty” and would remind Drew III throughout his life about Shorty’s will and that made for some of more memorable parts of the book.  Those, as well as Bundini’s love for his first wife Rhoda, even well after their divorce, are portrayed even better than the boxing matches in which Bundini was in Ali’s corner, giving “Champ” the encouragement he would need.

Much more than just a boxing book or a biography, “Bundini” captures the heart and soul of a man who is just as important a part of the legend of Muhammad Ali as is any other person in his life.  This book is one that should be read by everyone, not just boxing fans.

I wish to thank Hamlicar Publications for providing a copy of the book in exchange for an honest review.