Review of "Diamonds from the Dugout"

When I received this request for a review from the author, I was a bit surprised.  I knew about Mark Newman's work for MLB.com but I didn't know that he had written a book about stories told by players about memorable hits.  After reading this, I would say that not only were the hits memorable but so is this book.  Here is my review of "Diamonds from the Dugout." 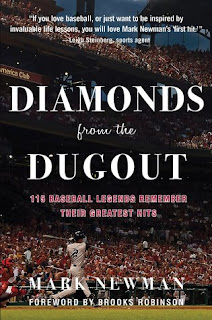 
Review:
The premise of this book comes from a simple question asked by the author to major league players – What hit meant the most to you and why?  This question was first asked by Mark Newman to Hall of Fame third baseman Brooks Robinson and from there, the author was taken on a long and interesting journey of stories that are wonderfully written and fun to read.


Some of the answers are predictable and many are surprising.  A few players said their most memorable hits were ones that either came in a crucial moment such as a postseason game - Mark Texiera and Robin Yount are two such players.  Others, such as Wade Boggs, chose a milestone hit.  Several others said it was their first hit in major leagues as it proved that they belong there, not in the minors.  Finally there were surprise answers as well.  This will be the closest to a spoiler for this book – an example of a surprise answer was Mike Piazza’s as it was not the home run in New York’s first game after the September 11, 2001 terrorist attacks.


There are a few other stories sprinkled in that are not about MLB players, such as the one about the most memorable hit for the author’s son, a story by former commissioner Bud Selig and one by comedian Arsenio Hall about the first time he was able to take his son to a World Series game.  All of them are entertaining and will make a reader either recall some of these moments fondly or will find out more about these players.


While most of the stories are fairly short – about one to two pages – there is a chapter completely devoted to Pete Rose.  The author states that he believes the all-time hits leader deserves his own chapter with this explanation: “It Pete Rose wants to talk about hitting, then you just start typing as fast as you can and let him keep talking in a stream of consciousness, and you give him a chapter all to himself.”


Writing like this is why this book should be on the bookshelf of every baseball fan, no matter the age, favorite player or team or what era of the game the reader follows.  They are all covered in the book and these stories are wonderful recollections of special moments for these players.


I wish to thank Mr. Newman for providing a copy of the book in exchange for an honest review.