I am always up for a good reading challenge and this book about the 1972 Miami Dolphins' perfect season helped me with two challenges I have going - one to finally read books that have been sitting on my shelf or e-reader for a while (this one nearly five years) and to gain extra points in a monthly challenge by reading a book on football.  Here is my review of "Undefeated" 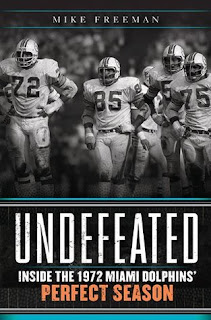 Review:
Only one team has completed an entire NFL season, including playoffs, undefeated since the 1970 merger between the NFL and AFL. That team, the 1972 Miami Dolphins, is the subject of this interesting book by Mike Freeman.

Just about everything and everybody associated with the Dolphins during that historic season is covered in the book. Whether a reader wants to learn about the penny-pinching ways of owner Joe Robbie, the brilliance of general manager Joe Thomas in putting the team together (he was fired before the season ended by Robbie), the intensity of head coach Don Shula or more about many of the star players on that team, there is excellent material about these topics.

The players’ stories are some of the best in the book. Two of them who played key roles in the success of the 1972 Dolphins were running back Mercury Morris and defensive lineman Manny Fernandez.  These two were chosen to be mentioned in this review because the combination of their stories on how they became key components to the undefeated season combined with their interesting personal stories make for excellent reading.  Of course, this isn’t to shortchange other players highlighted such as Larry Csonka, Paul Warfield, Bob Griese, Jake Scott and so many others. Morris and Fernandez are merely two examples of the players who are portrayed in a complete manner in this book.


Of course, the actual game on the field plays an important role in the book.  However, this is not a simple recap of each game, rehashing of important plays or wins, nor does it follow a chronological, orderly history lesson about the season.  Instead, everything that played a factor in the team’s historic run was mentioned.  That begins with in the locker room after Super Bowl VI, a crushing loss to the Dallas Cowboys.  Shula tells the team they will be back to the big game with a different result.  The journey ends with Miami proving their coach right by ending a perfect 17-0 season by defeating the Washington Redskins in Super Bowl VII.  That game is the one that is described with the most detail.  Even if a reader knows little else about the game, team or season, he or she will get a good sense of just how dominant this Dolphins team was in the game and over the entire year.

Every year the surviving members of this team celebrate whenever the last unbeaten NFL team loses its first game of the season.  They have good reason to do so, and readers who want to learn more about this special team should add this book to their libraries to find out why they have been celebrating for over 45 years.