Review of "Buried in the Sky"

While the specific mission to climb K2 in this book has been written as the topic of other books, this one specifically is told through the eyes of the Sherpas and it was a fantastic read.  Here is my review of "Buried in the Sky" 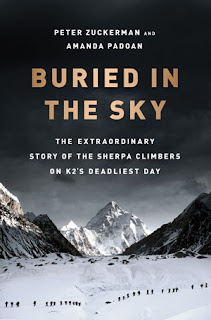 
“Buried in the Sky: The Extraordinary Story of the Sherpa Climbers on K2’s Deadliest Day” by Peter Zuckerman and Amanda Padoan


Much has been written about the tragedy on K2 in August 2008 in which eleven souls were lost.  However, this book tells the story of the Sherpas on that expedition, whether they were among the dead or survived the mission.  Their stories as well as their culture and beliefs are discussed in this excellent book by Peter Zuckerman and Amanda Padoan.


The book begins in the Bottleneck, which is located on the most dangerous section of the mountain known as the Death Zone.  There one of the Sherpas, Chirring Dorje, finds fellow Sherpa Pasang Lama stranded without some of his vital equipment. Instead of continuing onward, Chirring stays with Pasang and becomes part of a very famous rescue.  From there, the book is a page turner, alternating between descriptions of this particular climb and subsequent disaster and discussions on the lifestyle of the Sherpas.


These passages are some of the most fascinating in the book as a reader will learn about the Sherpa culture, their beliefs, their myths and the strong bonds many of them have to family.  One of the most fascinating aspects of their mythology is that it is believed that their supreme goddess sustains herself on human flesh and that deaths of climbers occur when she is hungry.  Their simple lifestyle when not climbing and their substantial financial windfall when paid by climbers (especially those with commercial sponsors, such as those on this mission) was also discussed in excellent detail.


While the climbers’ fates are also featured, other books on this expedition usually provide more details about their stories.  This book was written to show the work of those who usually do not get the credit they deserve and was told through their viewpoint – which was a joy to read as it told of this tragic day from a completely different perspective.