Ernie Banks is considered to be one of the greatest shortstops in baseball history, but much of his story aside from his sunny disposition is lost to many fans because he played on some very bad Chicago Cubs teams.  His story is told in this excellent biography.  Here is my review of "Let's Play Two". 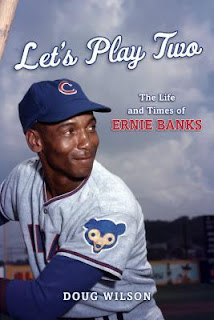 
“Let’s Play Two: The Life and Times of Ernie Banks” by Doug Wilson


Ernie Banks was a Hall of Fame player for the Chicago Cubs know primarily for three things: his happy demeanor, his joy for the game of baseball, and oh, by the way, he was a pretty good hitter as well.  Banks’ story is told in this excellent, complete biography by author Doug Wilson.


Every aspect of the life of “Mr. Cub” is covered, from Banks’ childhood in Dallas to his life after baseball which included health and financial problems up to his death in 2015.  Even then, one of the most enduring personality traits of Banks, his genuine desire to make others happy, still can be evident despite the less-than-happy late stages of his life.  Wilson illustrates the difficult childhood of Ernie and the other Banks children as they grew up in segregated North Dallas.


As for the baseball aspect of Banks’ life, that is completely explored and brought to the reader in excellent detail as well.  Banks was the first player to go from the Negro Leagues, where he was playing well for the Kansas City Monarchs, directly to the major leagues.  Signed by the Cubs, Banks immediately made his presence felt on field, winning the job as the everyday shortstop for the Cubs..  It was common practice to have black players roomed together at the time and Banks was roomed with another shortstop, Gene Baker, when they were called up to the Cubs. Banks beat out his roommate for the shortstop position, forcing Baker to learn how to play second base.


From there, Banks took off, winning back to back MVP awards and becoming one of only eight men at the time to hit 500 home runs. The Cubs’ penchant for losing is also on display in the book with a chapter on their failed experiment with a “college of coaches” running the team instead of a manager.  Their 1969 collapse after leading the National League East division is also well documented – enough that a reader will either remember the events well or will feel like he or she was there.


One other aspect of this time frame in baseball and society that is covered well is the racism and prejudice that Banks and other players of color faced at that time, especially in Florida during spring training.  Not only will the reader learn about the mistreatment of black players by many (including white teammates) but he or she will come away with a deeper appreciation of Banks’ disposition through all the racism.  But, as Wilson also notes in the book, some of Banks’ measured comments about civil rights were taken to mean that he wasn’t a good role model to use his status as one of the best baseball players to speak out.  This issue is written with a good amount of sensitivity and insight and are stories that should be told.


Any reader who is a Cubs fan, interested in baseball history or wants to learn more about “Mr. Cub” needs to add this to his or her library.  It is a thoroughly enjoyable, easy read that should bring a smile to the reader as big as Ernie’s.


I wish to thank Rowman and Littlefield for providing a copy of the book in exchange for an honest review.