Review of "The New Boys of Summer"

While not STRICTLY obeying this New Year's resolution, I am happy that I can still say I am working on a resolution in February to read books that were sent to me by authors and publishers awhile ago.  This is one that helps toward that resolution and it turned out to be better than I had hoped.  Here is my review of "The New Boys of Summer" 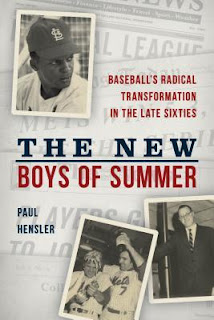 
Review:
Major league baseball underwent many changes between the 1968 and 1969 seasons.  Due to the lack of offense in 1968, dubbed “The Year of the Pitcher”, the pitching mound was lowered by five inches and other rule changes were implemented to increase run scoring.  Four new teams, two in each league, started play in 1969.  These are just a small sample of the topics discussed that affected the sport in those two years in this excellent book by Paul Hensler.
Hensler weaves together recaps of on-field action, some of the background history of the sport, hot button issues of the time such as civil rights and the Vietnam War, and other issues affecting the sport such as franchise relocation and stadium building. By doing so, the book is a thorough look at just about anything related to the sport during those two years. Hensler writes about topics that generated much protest in a fair and neutral manner, even if the sport took criticism for its actions.  An example of this was the section on baseball’s lack of a complete time of mourning when Martin Luther King Jr. and Robert Kennedy were assassinated in 1968.


Baseball matters off the field are well researched and chronicled as well, such as the firing of Commissioner William Eckert and replacing him with Bowie Kuhn, the rise of the major league players’ union led by Marvin Miller and the political wrangling by each of the four cities – Kansas City, Seattle, San Diego and Montreal – that were awarded expansion teams that began play in 1969.  While readers who like to concentrate more on the actual games and less on the business side will find these chapters more tedious, those readers who like these topics will be thrilled to learn more about the last minute deals that each of these cities had to do in order to ensure they received a franchise.
One other topic that seems unusual to find in a book about 1960’s baseball is the topic of advanced statistics.  This was the time that IBM computers started to become more widely used in various businesses, and baseball was no exception.  Their use included attempts to find different statistics that may measure value of things like clutch performance and how much players help their teams win games.
One such use of computers was to give different percentage values to different game situations to determine “clutch” players.  For example, a hitter who gets on base when his team is down by one run in the ninth inning with two runners on base and no one out will get a higher percentage than that batter who came up in the same inning with no one on base and no one out.  The computers allowed teams to gather this data in ways that could never have been done manually.  There is even some humor in this section as Hensler shares a prediction made by a computer earlier in 1965.  In mid-September, a computer gave the Minnesota Twins a 10,000-1 long shot chance to win the American League pennant.  At the time of the prediction, the Twins were in first place with a nine game lead and sixteen games left to play.  So much for the use of computers to place odds for gamblers.


Overall, this book is an excellent account of everything baseball-related for those two years.  The text is fairly dense and cannot be read and absorbed quickly.  Casual fans may find this pace not to their liking, but hard core fans and baseball historians will want to add this book to their libraries.
I wish to thank Rowman and Littlefield for providing a copy of the book in exchange for an honest review.
Book Format Read:
Hardcover