Review of "The Russian Five"

When the Detroit Red Wings had five Russian players skate together for the first time, they made history in several ways.  That history is captured in this book by Keith Gave. Here is my review of "The Russian Five" 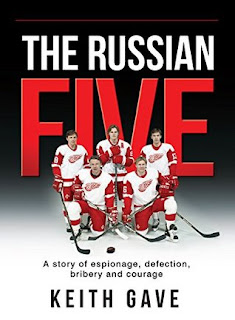 Title/Author:
“The Russian Five: A Story of Espionage, Defection, Bribery and Courage” by Keith Gave

Review:
For the first 75 years or so of its existence, the National Hockey League consisted mostly of Canadian and American players.  Slowly, European players started playing during the 1970s. But when five players from Russia who played for the famed Red Army team helped restore glory to the Detroit Red Wings in the 1990’s, the hockey world took notice. The stories behind these players and the extraordinary danger to get some of them to Detroit is captured in this very good book by Keith Gave.

As a journalist who spoke Russian, Gave had a role with Red Wings personnel by traveling to Helsinki to speak with one of the players. Because of this, he was able to provide a viewpoint that makes the stories terrific.  They would be intriguing enough as some of the methods used to get the players out of Russia were straight out of Cold War spy novels, such as faking a cancer diagnosis for Vladimir Konstintinov.

These pages were even better than the hockey passages, which were decent but often repetitive.  The reader will be reminded several times, for just two examples, that the New Jersey Devils swept the Red Wings in the 1995 Stanley Cup Finals and that the author introduced the reader to the “Green Unit” several times.  The chapters on the hockey team felt like they were previous articles put together for the book instead of written as one story.

That doesn’t take away from the riveting stories of the five Russians, the danger they faced when leaving Russia and the sheer joy they felt when they and the Red Wings won back to back Stanley Cups in 1997 and 1998.  The latter one was especially touching as the team brought the Cup to  Konstintinov in a wheelchair.  He, along with a team masseuse, were seriously injured in a car accident soon after the 1997 victory and the team wanted to let him know that he was still a part of the team.Those stories are why this book should be on the shelves of all hockey fans, especially Red Wings fans.