With the completion of baseball's Winter Meetings, actions by the front office of the teams was on the minds of all baseball fans.  With that in mind, it is with excellent timing that I picked up this book on Ford Frick, the third commissioner in baseball history. He was best known as the man who added an asterisk to Roger Maris's record of 61 home runs in 1961. That is not completely accurate.  The complete story, along with the rest of Frick's career, is captured in this book.  Here is my review of "Frick*" 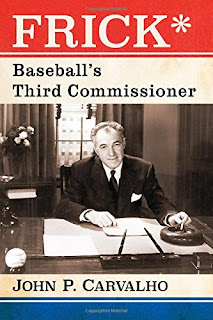 Review:
In 1961, when Roger Maris and Mickey Mantle were threatening to break Babe Ruth’s single season record of 60 home runs, a former ghostwriter for Ruth declared that in order for a season record to be recognized, it had to be accomplished in 154 games, even though the season was extended to 162 games that season. When Maris hit his 61st home run in game 162, his accomplishment was recorded with an asterisk.

The man whose ruling brought about the unusual notation, Ford Frick, was the baseball commissioner and therefore had the power to make such a ruling. His time as commissioner and his accomplishments in journalism and baseball prior to becoming the third commissioner in baseball history is told in this well-written book by John P. Carvalho.

More than just a recap of Ford’s life, Carvalho writes in depth about the ruling and how the asterisk became the notation for Maris’s record.  It is noted that this was not Frick’s idea to use that symbol, but instead an offhand remark by one of Frick’s most ardent supporters, sportswriter Dick Young from New York.

Frick was also a sportswriter before becoming president of the National League and then commissioner. One of his more well-known assignments was as a ghostwriter for Babe Ruth when Ruth would be “writing” columns for newspapers during his playing days. Critics of Ford’s ruling about single season records point to this job and would say that this was what drove his ruling – to make sure that Ruth would still hold the record.  Carvalho does a good job of refuting that criticism and portrays Frick as a man who made decisions involving the game independently without too much influence from others.

Frick also oversaw many important milestones in the game as well, including keeping the game going during World War II, integration, teams moving to new locations (five franchises moved during his tenure) and expansion from 16 to 20 teams. Carvalho covers these issues fairly as he does portray Frick as a man who would usually defer to the wishes of committees created to address these issues. However, that led to more criticism with some calling him the “do-nothing” commissioner. Without sounding too complimentary, Carvalho addresses those concerns. Just like with the Maris/Ruth ruling, Frick’s work on those issues was done with much input from others but the ultimate decisions were his.

This book is recommended for readers who wish to learn about the history of the game during that era and the background to understand why so many teams moved during that time or what was going on in the administrative offices of both the National League and the commissioner’s office. It is a complete, thorough account of Frick’s time in baseball that should be on the bookshelf of readers who enjoy the sport.

I wish to thank McFarland Publishing for providing a copy of the book in exchange for an honest review.