Review of "Drama in the Bahamas"

We are coming up on the 35th anniversary of the last fight of Muhammad Ali.  For those of us who saw that fight, as I did in a hockey arena on closed circuit TV, we remember it as a sad occasion to see the great champion only as a shell of what he once was. This book is an excellent account not only of the fight but of the entire adventure that led up to the bout.  Here is my review of "Drama in the Bahamas." 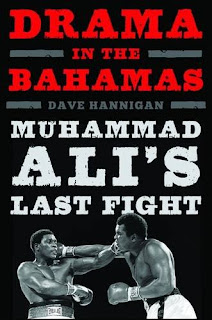 Review:
More often than not, the last fight in the career of a championship boxer is a sad occasion. That fighter believes he has enough left to win that fight and maybe even be on track to regain the championship or win it in another weight class. In 1981, that was the situation for Muhammad Ali.  At least publicly, he believed that despite his loss in 1980 to Larry Holmes he could become a four-time champion and would be on his way back by defeating Trevor Berbick.

That didn’t happen as Ali lost the fight, and as this well-written book by Dave Hannigan illustrates, Ali was not as focused on the fight as one would think for a person who wants to reclaim the title.  Also, the book details the many blunders that promoters made in preparation for this fight, as several times it seemed that the fight would not happen.

The book explores nearly aspect of the events that led up to the bout on December 11, 1981 and there were many obstacles. It was clear from the start that the promoters were short on money and had trouble finding a locale for the fight.  Even the one that was ultimately picked in the Bahamas was makeshift, cramped and uncomfortable for the fighters (the undercard included Thomas Hearns and Greg Page).

While he didn’t write a lot of words describing this particular issue, one of the better illustrations of just how much of a fiasco the whole event turned into was when Hannigan wrote that there was a lack of new boxing gloves for the fighters. This shortage was severe enough that Hannigan mentioned that trainers were requested not to cut off the laces when removing the gloves from the fighter’s hands so that they may be used again.  For a major boxing event, this was one of the sadder tales.

But none were sadder than that of Ali, who was a shell of the great fighter that he was and this is the best writing in the book.  The press, TV networks and most other promoters wanted nothing to do with the bout as they did not want the public to see Ali in this condition – they wanted to remember him as the brash young man with the quick moves and devastating punches.  Also, Berbick’s rise to contender status by the time this fight took place is also well-documented by Hannigan.  Much like the publicity, Berbick wasn’t forgotten, but he certainly played second fiddle to Ali, whose loss made for a sad ending to an excellent career. This book is one that all boxing fans should add to their bookshelves.