For everyone who is celebrating, Merry Christmas and Happy Hanukkah.  I wish everyone a joyous holiday season, no matter how you celebrate.

While the holiday season doesn't coincide with baseball season, debate amongst fans about awards, players and the like knows no season.  So with that mind, I present this review on a terrific book on some of the more questionable selections on the most valuable player in baseball. This is my review of "Baseball's Most Baffling MVP Ballots". 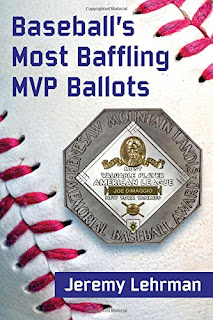 
Review:
Baseball fans love to debate nearly everything about the game – are pitchers more valuable than position players? Are batting averages overrated? Should a player on a last place team win the Most Valuable Player (MVP) award?


This last question, while not directly answered, is just one of the many aspects of that coveted award discussed in this witty, well-researched and well-written book by Jeremy Lehrman. As the title suggests, it does talk about some of the more controversial  MVP awards, but it does so much more than just that.


Of course, some of the most famous “wrong” choices are discussed at length such as Roger Pekinpaugh in 1925, Dick Groat in 1960, Willie Stargell in 1979 and Justin Morneau in 2006.  Through advanced statistical analysis, mostly using Wins Above Replacement (WAR), Lehrman makes a compelling case on who should have been the proper winner those years and others as well.


For those who may think that this is just another book that tries to rewrite history by using advanced statistics that were not in vogue during prior generations, think again.  Yes, Lehrman does that, but for every disagreement with the winner chosen by the baseball writers he does two things that are admirable: one is that for most of the winners, he gives a plausible explanation of why he believes that the winner was chosen and will often say that the choice does have some merit, even that winner was not necessarily the best choice. Lehrman then follows that up with who he believes was the true MVP with statistical proof to back him up. Most of the time, he relies just on the raw advanced data for this with some other anecdotes.


These anecdotes include some great one-liners that make reading the book a treat.  Among the best ones are these three gems:
Written in a conversational style with strong support for his conclusions, extensive knowledge and use of advanced statistical analysis and yet some consideration for those who still value traditional statistics and methods, this book is one of the better baseball books that question previous awards or strategy. It is one that serious baseball fans must read, especially those who enjoy debating the topics at the start of this review.


I wish to thank McFarland Publishing for providing a copy of the book in exchange for an honest review.