2016 was a terrific year in sports - the Chicago Cubs won their first championship in 108 years, the Cleveland Cavaliers brought their city a championship team in any sport for the first time in 52 years, and two American swimmers (Michael Phelps and Katie Ledecky) became the most decorated Olympic athletes at the Rio games.  It was also a year of sadness, as we lost many in the sports world, including Muhammad Ali, Gordie Howe, and Arnold Palmer, three of the greatest at their games.

Also, on a personal note, 2016 was a terrific year for this blog and myself, with more and more of you coming over to take a look at the reviews, offer books and other kind words.  I thank each and every person who has visited this site - we shared the same love of sports and through books, that passion can be shared and passed down through the generations.

Here's wishing everyone a safe, happy and prosperous 2017. 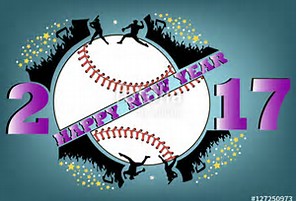 Email ThisBlogThis!Share to TwitterShare to FacebookShare to Pinterest
Labels: Musing