Review of "Father Bauer and the Great Experiment"

No matter the sport or how big a fan one is of that sport, there is always something new that will be learned by reading books about that game. I had never known that the Canadian Olympic hockey team was not always made up of the best amateur or professional players. The man who came up the idea to create this national team is the subject of this very good book.  Here is my review of "Father Bauer and the Great Experiment." 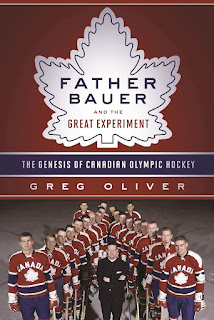 Title/Author:
“Father Bauer and the Great Experiment: The Genesis of Canadian Olympic Hockey” by Greg Oliver

Review:
It is hard to picture now, but until 1963, Canada’s Olympic hockey was not a collection of the best players, either amateur or professional, as is the case now. The team that won the Canadian Junior championship the previous year was sent to the Olympics and usually the results were positive. However, that was not the case in 1960 when the United States pulled off the upset and won the gold medal.

Meanwhile, Father David Bauer had a dream to create a true national team that would represent Canada in all international hockey competition as well as the Olympics. His dream became a reality and the road that led to the creation of this team, and what happened afterward as well, is captured in this well-researched and well-written book by Greg Oliver.

The events that led up to the creation of the national team are covered in full detail and the reader will learn a lot about why there was no true national team before 1963.  It is important to read about this as it will illustrate to the reader why Father Bauer’s work to convince the powers-that-be to create this team was so crucial to the sport.  This was now a true national team and represented Canada well, despite not earning a medal due to a change in the determination of the final standings in the 1964 Olympics. Oliver’s writing will take the reader back to that time and he or she will feel much sympathy for the team.

The story doesn’t stop there, as Oliver chronicles the later decision by Canada to stop participating in international tourneys and Olympic Games, only to make a return in 1980. Father Bauer’s involvement with the team and the sport through this period is also covered and before this, Oliver does his best work in the book by writing about Father Bauer’s career in hockey at St. Michael’s College. The chapters on his coaching career and the turns it took is well worth the time to read and the reader will come to know the man and how important a role he plays in the sport.

This is a very good book that is recommended for any reader who wants to learn more about the history of Canadian international hockey or about the life of the man who made the country’s national team truly national.  Readers who are not familiar with the history of this team will learn a lot and will see just how important the sport is in the lives of all Canadians, not just fans and players. But most important, the reader will learn how much Father Bauer meant to the game and why he is a beloved figure to all of those who played for him.

I wish to thank ECW Press for providing a copy of the book through NetGalley in exchange for an honest review.