Review of "When the Garden Was Eden"

One New Year's resolution I always make since I started writing reviews is to clear out some of the older books on my shelf and get those reviews done.  This book, written in 2011, is the first one to keeping that resolution.  It only makes sense, as the book's main subject is an event that will have its 50th anniversary later this year.  Here is my review of "When the Garden Was Eden" 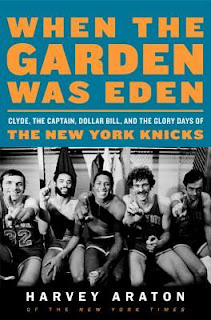 Title/Author:
“When the Garden Was Eden: Clyde, the Captain, Dollar Bill and the Glory Days of the New York Knicks” by Harvey Araton

Review:
One of the most dramatic moments in NBA history occurred when the captain of the New York Knicks, Willis Reed, came out with his team for the start of the seventh game of the 1970 Finals. The story of that moment, and that team, has grown to legendary status and it captured in this very good book by Harvey Araton.

While the book was written just after the 40th anniversary of this even, it is still just as memorable a time for Knicks fans now, coming up on the 50th anniversary.  Even those who have only seen the grainy film of Reed making his way down the tunnel after suffering a severe injury in game 5 smile when mentioning "The Captain."  Araton doesn't limit his complimentary and almost idyllic prose to Reed.  Other Knicks players such as Walt "Clyde" Frazier, "Dollar" Bill Bradley, Dick Barnett, coach Red Holtzman and later Earl "The Pearl" Monroe are just some of the players who not only are highlighted in their contributions to the team, but also in a significant number of pages for each one.

These mini-biographies on each man are the slowest parts of the book, as each one goes into great detail about their early lives, their youth, their thoughts on the Knicks and their post-basketball lives, especially Frazier who is a long-time broadcaster for the team.  However, once a reader gets past them, starting with Chapter 7, the history lesson for the Knicks is terrific.  Reading about not only the 1970 championship team, but also their next few years which culminated in another championship (to date, the latest one for this team) in 1973, was like taking a time trip back to Madison Square Garden in the early 1970's.  The reader will not only feel like he or she is enjoying the basketball from that era, but will also get a taste of New York City in those days – at least the more positive social aspects.

Some personal stories about "super fans" and other associated people also help capture the atmosphere and stories that make up the New York Knicks of that time, considered to be the best in the team's history.  How "celebrity row" came into being and why so many celebrities wanted to be seen at Madison Square Garden is probably the best reading in the book that isn't basketball.  And speaking of the basketball writing, that is the best aspect of the book as it almost brings the reader courtside to the action, especially that game in 1970 in which the Knicks dominated the Los Angeles Lakers to capture the championship.

Knicks fans will especially want to read this, if they have not already done so.  Even if one is not a New York fan, but instead likes to read about basketball history, this is one that will be enjoyed by that person.
Book Format Read:
Hardcover