Happy New Year to all my fellow sports book readers!  One resolution I am determined to keep this year is to catch up on reviews of books provided to me by authors or publishers but for one reason or another I never got around to doing.  This review is the first book in attempting to keep that resolution as it was sent to me soon after publication in the summer of 2019.  Here is my review of "Baseball Gods in Scandal" 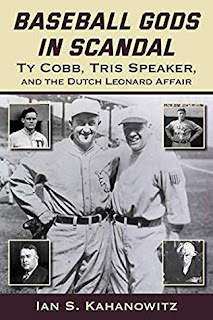 Review:
The late 1910's and 1920's was a trying time for professional baseball.  Caught up in several gambling scandals, the most famous being the Chicago White Sox throwing the 1919 World Series, the sport was well on its way to cleaning itself up thanks to the iron fist of its first commissioner, Kennesaw Mountain Landis.  However, in 1926 Landis received a letter from former pitcher Dutch Leonard about another gambling problem that season. That allegation, which involved two legendary players, is the subject of this interesting book by Ian Kahanowitz.

Late in the 1919 season, after the White Sox had already clinched the American League pennant and the Cleveland Indians were assured of finishing second, the Indians and Detroit Tigers played a mostly meaningless game.  "Mostly" is the key word here as the Tigers were in a fierce race for third place.  Finishing in the top three of the league was a big deal in those days as the top three teams received shares of the revenue generated from the World Series.  At the time, that was a significant amount of money given the player salaries.  Allegedly, the two biggest stars in that game, Ty Cobb of the Tigers and Tris Speaker of the Indians, were involved in a betting scheme to ensure the Tigers would win and finish third.  That was the subject of Leonard's letter and it set off a firestorm of controversy.

Of course, Cobb and Speaker denied having any involvement in any gambling. Their stories, as well as Leonard's and those of Landis, American League President Ban Johnson (whose feud and power struggle with Landis make for terrific reading) and Smokey Joe Wood, who also supposedly knew about this incident but had conflicting testimony, are captured in great detail by Kahanowitz.  At times, the writing is so detailed that a reader must read it carefully, almost like the transcript of a legal trial.  This review will not contain any spoilers, so one must read the book to know the outcome.

However, reading the book is something that anyone interested in baseball during that era, or wants to learn more about the main characters mentioned above should do.  It will teach the reader a lot about this mostly forgotten but historic incident in baseball history.

I wish to thank Mr. Kahanowitz for providing a copy of the book in exchange for an honest review.
Book Format Read:
E-book (PDF)