Not many events in sports will still have people talking about it many decades later, but the mythical "Called Shot" home run by Babe Ruth is one of them.  Considering it was done during a World Series by the most famous baseball player, it isn't shocking.  The only question is whether it actually happened.  This book will provide a lot of information on that event without giving away the answer to that question.  Here is a review of "Babe Ruth's Called Shot." 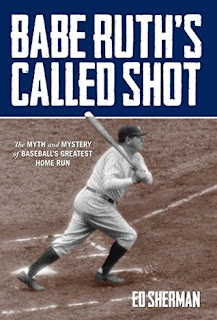 Review:
Baseball fans of all levels of interest have at least heard of the "Called Shot", the famous home run hit by Yankee legend Babe Ruth in the 1932 World Series against the Chicago Cubs.  Depending on what one reads or who is asked about it, the responses range from "Babe absolutely did point to center field and hit the ball in the exact spot" to "That never happened."  Given the mythical proportions to which the story has grown and still is repeated more than 80 years later, the question remains of whether this actually happened or not.

Ed Sherman's book may disappoint some readers because it doesn't really provide any new information or make a strong case one way or the other.  Instead, he provides insight into the famous home run by covering every possible means.  He writes about the perspectives from fans – this is how the book starts with the viewpoint of one of the most famous fans at that game, Supreme Court Justice John Paul Stevens.  Stevens was a nine-year old boy at that game and was a big Cubs fan.  So naturally he was disappointed with the result, but awed at the moment.

From there, others are either interviewed or Sherman did extensive research into the viewpoints of other fans.  He wrote about players from both teams that shared their observations (if they actually saw the home run) while also providing the backdrop for the home run, such as the merciless heckling Ruth was receiving from players in the Cubs dugout.  A chapter each is dedicated to Ruth and Charlie Root, the Cubs pitcher who gave up the home run.  Root's story is quite interesting to read as he was adamant that Ruth did NOT "call" that home run and is very angry when people mention it to him.  As for the chapter on Ruth, much information comes from his daughter Julia and that makes for entertaining reading as well.

There is also a chapter on what sportswriters of the time wrote about the home run, and this could make for a Hall of Fame for writers – Grantland Rice, Red Smith, Damon Runyard and Shirley Popovich are just a few of the scribes whom Sherman quotes in this chapter.  After this, the book does drag a little bit with some extraneous information that, like the rest of the book, will not provide the reader with an answer one way or the other about the home run, but is still fun to read about and debate all these decades later. Any baseball fan will enjoy picking up this book.