While there are many books written about Serena Williams, including an autobiography in 2009, this book is worth the time to read as it delves deeply into her life and activism off the court as well as her record-setting tennis career.  Here is my review of "Serena Williams" 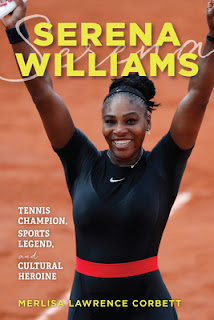 Review:
When an athlete becomes known when just the first name is said – for example Tiger or LeBron – it is clear that the athlete would be not only a great player but well-known outside of sports as well.  Serena Williams – hereafter referred to as "Serena" – has achieved this legendary status.  This biography by sportswriter Merlisa Lawrence Corbett tells readers how she rose to the top of the tennis world and at the same time became a voice for social, racial and gender equality.

Readers who want to learn about Serena's tennis career will have good material at their disposal, especially in the first quarter of the book and also near the end when Serena made her comeback attempt after giving birth to her daughter. These sections read like long recaps of important matches and Grand Slam events that Serena won mixed in with many observations made by other writers, her father Richard and her older sister Venus.

Throughout the book, Lawrence Corbett will remind readers frequently of the sisterly love between Serena and Venus.  This is especially noteworthy early in their respective careers as it was initially believed by many, including Richard, that Venus was the one who was going to be the tennis superstar. While Venus did end up having a very good career with multiple Grand Slam title, she was eclipsed by her younger sister, who at the time of publication has won 23 of these titles.

While the tennis makes for good reading, more of the book is dedicated to other aspects of Serena and her activism.  It is noted that her savvy use of social media has helped to have an even bigger presence than other athletes who were also addressing racial and gender issues.  Serena's successes are celebrated, such as getting all of the Grand Slam tournaments to offer equal purses for both men and women.  Even Serena's marketing success and fashion tastes (also part of the marketing) are described in the book.  These sections, while at times do repeat some talking points, nonetheless make very good parts of the book in which the reader will learn what makes Serena the international star that she is.
Lawrence Corbett does not shy away from addressing controversial topics such as the behavior of Richard, the booing of the two sisters at tournaments early in their careers and Serena's outburst at an official at the 2018 US Open finals when she was penalized a point.  These subjects are presented in a fair manner without editorializing and therefore the reader can come to his or her own conclusion. While no biography is truly complete without interviews from either the subject or those close to the person, the research and writing in this book makes it one that is worth the time to read if a reader wants to learn the complete story of Serena.