As a huge hockey fan, I am one who doesn't enjoy fighting in the game. I believe it has its place but I don't get as pumped up for a fight at a game as other fans.  That said, some of the better hockey memoirs/biographies I have read are about those players who make a living in the game with their fists.  This is another good book written by a player who was an enforcer, Stu Grimson.  Here is my review of "Grim Reaper" 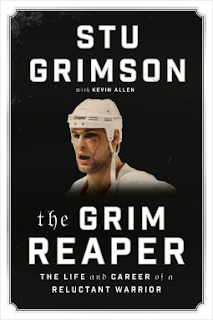 Title/Author:
“The Grim Reaper: The Life and Career of a Reluctant Warrior” by Stu Grimson

Review:
The life of a hockey player who is called an “enforcer”, a “fighter” or a “goon” is quite different than the life of other hockey players. They play fewer minutes, are asked to perform a duty in which they face great risk of injury, their careers can be much shorter than those of other players, they can play in relative anonymity and they also switch teams frequently.  Aside from a short career, this is pretty accurate for Stu Grimson who has written a very good memoir about his time as an enforcer.

Having read good books on other enforcers such as Bob Probert and Derek Boogardt, I picked this one up with high expectations and it did not disappoint.  It did not follow the usual format from youth to college or junior hockey to the pros to life after hockey. While all of these life cycle events are covered by Grimson with many great stories, the book does skip around at times, especially when he is discussing his life after hockey.

Despite that, reading about important events in his life other than hockey was very enjoyable, something that usually isn’t the case with sports memoirs. His time working as an attorney for the NHL Players Association was very intriguing, especially when he was fired from the position by the person whom he helped attain the director position of the union. He also talks about meeting his birth parents (he and his sister were adopted) and the fact that his birth father was also a professional athlete (played football in the Canadian Football League) and became a lawyer after his playing days were over is just an amazing coincidence.

Readers who prefer to read about his hockey career will also be happy as he shares many stories of his fights on the ice, his trouble with rules during junior hockey and through it all, he always wondered if this was the best path to make a career in the sport. He repeatedly states at every stop in his professional career (there were many, as he played for seven different NHL teams, including two stints with the Anaheim Ducks) he states he would do whatever he needed to do in order to contribute to the success of his team.  From the descriptions of some of his actions, there was no reason to believe otherwise.

His description of fights, especially one in which Dave Brown broke the orbital bone of Grimson early in his career when he played on the Blackhawks. It was almost gruesome to read the details of not only the injury but how Brown threw the punches.  However, there was no hard feelings between the two players and Brown did show concern.  That is part of the code present among enforcers in the NHL and Grimson talks often about that and displays much respect for his fellow fighters who obey these unwritten rules.

Whether or not one enjoys fighting as part of the game, hockey fans should pick up this book and get a very good perspective into the life and mind of those players whose main job is not to score goals or keep the puck out of the net, but instead have to use their fists to provide value to their teams.

I wish to thank Penguin Random House Canada for providing a copy of the book via NetGalley in exchange for an honest review.
Book Format Read:
E-book (Kindle)