For college basketball fans, just say the school name "Chaminade" and those of a certain age (or those who know their history of the sport) will know exactly how the school became known to them - for pulling off the biggest upset in the sport's history when they defeated #1 ranked Virginia and Ralph Sampson in 1982.  A book has been written about that historic game and it was a great read.  Here is my review of "The Greatest Upset Never Seen" 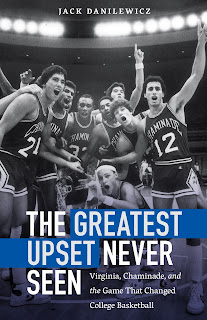 Review:
On December 23, 1982, one of the biggest upsets in college basketball history occurred when Chaminade University, located in Honolulu, defeated the top-ranked University of Virginia 77-72.  Not only was the magnitude of the upset noteworthy, but because it didn't finish until the early hours of Christmas Eve, not many people knew about it for a few days.  The game itself as well as the two schools and several people involved in the game are the subject of this great book by Jack Danilewicz.

The game itself is covered extensively in chapter 6, and that is the only place in the book where the reader will find information on the actual game itself.  That is not necessarily a bad thing, because just that chapter alone would make a great book as the writing is well beyond that of an extended game recap.  The reader feels like he is on the benches of the two teams and even sitting on the rim with Richard Haensich of Chaminade in the post-game celebration when reading about the game. It should be noted that this wasn't a game Virginia took lightly or that they didn't play with complete intensity, as Danilewicz makes that clear throughout the chapter.  The Silverswords simply outplayed and defeated the Cavaliers.  Also noteworthy is the fact that the defeat didn't haunt Virginia for the rest of the season as they went back to their winning ways in conference play and the NCAA tourney, although they fell short of their goal of a championship as they were eliminated in the Final Four.

The rest of the book is a wonderful portrait of both schools and some of the key personnel in the game for both teams.  Danilewicz does an excellent job of capturing the essence of the schools without a lot of fluff or unnecessary text as the reader will learn much about both schools, especially Chaminade. It should be noted that their basketball program, while successful in the National Association of Intercollegiate Athletics (NAIA) before the Virginia game, that win made it even more visible and noticed. That game proved not to be a fluke as the next two years, Chaminade defeated Louisville as well, with the 1984 Louisville team ranked #12 at the time of its defeat. The Silverswords' success led to the creation of one of the most popular college basketball tournaments, the Maui Invitational.

Profiles about some of the people involved in the game are also well written.  This is especially true for the two coaches, Virginia's Terry Holland and Chaminade's Merv Lopes.  The story of Lopes will especially warm the hearts of the readers, as will the Hawaiian adventures of Tony Randolph, who enrolled at Chaminade after no Division I school recruited him.  Randolph played against the star of the Cavaliers, Ralph Sampson, who had a nice portrait in the book as well.

Whether a reader wants to remember the game, learn what the schools were like before the historic game, or what became of them and the players afterward, this book is a very good accounting of the biggest upset in college basketball history.  Readers who like to read about the history of that sport will want to add it to their libraries.