Review of "Earl: The Greatest Bowler of All Time"

As a kid who loved bowling, I remember spending Saturday afternoons in the winter watching ABC's bowling telecasts.  Many times one of the five finalists on the televised tournaments would be Earl Anthony.  He was certainly one of my favorite bowlers of the time, and Barry Sparks has written a very good biography of the man considered the greatest bowler ever.  Here is my review of that book 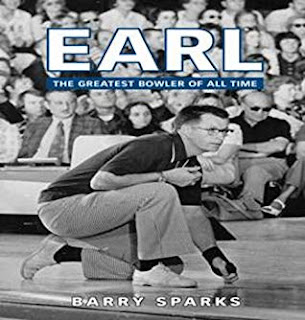 Title/Author:
“Earl: The Greatest Bowler of All Time” by Barry Sparks

Review:
There was a time when bowling was one of the most popular sports on television. Every Saturday a tournament would be shown in which the five finalists would compete in a single-elimination tourney, leading to a championship match at the end.  For a period in the 1970's, viewers would often see Earl Anthony, a man who didn't take up the sport until he was 21, dominate the field week after week.  Veteran sportswriter Barry Sparks has written a biography on Anthony as a tribute to the bowler's legendary status.

Among the many accomplishments Anthony had during his career was becoming the first bowler to earn over $100,000 in a season in 1975. This was during a time when bowlers often had to compete for small purses during non-televised tourneys and often would be incurring expenses out of their own pocket if they did not perform well enough to earn cash.  Sparks' commentary on the life of a bowler, and specifically that of Anthony early in his career, paints a great picture of the nature of the sport and its participants during that time.

Life away from the lanes was also nicely portrayed by Sparks as the reader will get a great understanding of how Anthony was basically a quiet individual, happy with his simple life and wanting to help others. On the lanes, it is a different story – except for the quiet part.  He did complain enough when he felt that there were conditions that made it difficult for him and others, such as when there was a belief that the Professional Bowlers Association (PBA) were making lane conditions more difficult for left handed bowlers than for right handers.  It should be noted that two of the most successful bowlers at the time – Anthony and Johnny Petraglia – were both southpaws.

While the book does seem to be a slow, methodical read at times and requires careful attention by the reader to follow along, this is a very good read.  Readers like me who remember watching the bowling telecasts on cold Saturday afternoons in the winter will especially want to read this account of whom the PBA has called its greatest bowler.

I wish to thank Mr. Sparks for providing a copy of the book in exchange for an honest review.
Book Format Read:
Paperback