One personal reading goal I have every year is to read some books that I have had on my to-be-read list for years and this one is one of them.  Since it was first published in 2014, I have wanted to read about the first NCAA basketball championship tournament and this book is a good one on that topic.  Here is my review of "March 1939" 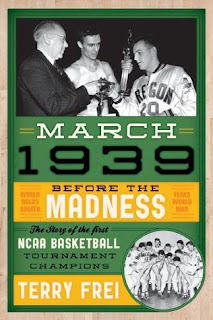 
“March 1939: Before the Madness – The Story of the First NCAA Basketball Champions” by Terry Frei


The championship tournament to crown the collegiate national champions in men’s basketball had very humble beginnings. When it started in 1939, it was nothing close to the “March Madness” that is the tourney today.  This book by Terry Frei not only informs the reader about that first championship journey but also is a good source of information on the winners of that first tourney, the Oregon Webfoots (the name “Ducks” would come later).


Much of the book is dedicated to the players on that Webfoots team, although because none of the players nor close relatives are still alive, Frei could not do research for the book through first hand accounts via interview.  He states this in the introduction, which was a good thing as it becomes clear that this material is presented in a different manner than other books of this genre in which there are more quotes and stories from the people involved.


That doesn’t mean the information isn’t good. The reader will learn much about the young men representing the University of Oregon at a time when the center of the college basketball universe revolved around New York City and Madison Square Garden. While the Webfoots’ season is the primary focus, there is also a good deal of information on the NIT (it started the year before the first NCAA tourney), the myths surrounding the NIT and the champions of that tourney in 1939, the Long Island University Blackbirds and their legendary coach Claire Bee.


It did seem a bit puzzling to include them in this book, but that did help to create a good picture of the state of the game in 1939 and how the East Coast dominated in not only the play and the press, but their feeling that schools in the West weren’t equals to the Eastern teams. Oregon took a trip cross country via train and while the results on the court were mixed, the New York press got a look at the future champions.


For writing about the sport itself, the sections on the Webfoots’ games in the Western championship and the championship game itself against Ohio State was the best section in the book for that information. The game was certainly played differently at that time, with scores in the 50’s considered high, and the reader will learn much about how the Webfoots executed their plays, passes and shots.


For a good look at the first NCAA tournament champion Oregon Webfoots and the status of the game and the world, as every chapter has several blurbs about the war in Europe, this book is recommended for readers interested in those topics.