Review of "Here and Gone"

This book's main topic was one in which I have always been fascinated: sports teams that folded or otherwise ceased operations.  When author John Rust sent me an email to ask if I was interested in reviewing this book, I certainly wasted no time in responding and his book was everything I could hope for, even if a couple teams that I remember seeing didn't make it into the book (thinking of the Danbury Trashers hockey team and the Minnesota Kicks soccer team), but he still did a nice job of sharing stories about failed teams and leagues.  Here is my review of "Here and Gone" 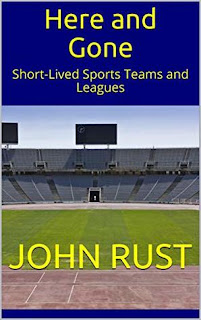 Review:
Sports fans are familiar with the scenario: a brand new team or league is formed with expectations that people will come out and support a sports team in a new venue or a new team that replaces one that folded or moved away.  Then problems arise, from lack of funds to lack of fans to poor management and the team is gone, with not many people even noticing or caring.  However, author John Rust did care enough to write a book of essays about teams and leagues that did not last for long.

What is most impressive about the book is that Rust covers five different sports over a long time frame and was able to find information about some of the more obscure teams and leagues.  How many fans realize that there have been professional volleyball leagues?  Or that lacrosse has tried to start several leagues?  Well, Rust talks about these sports and some of the least known teams in those short start-ups. These are mixed in with writings about teams in some of the more well-known leagues that had short lives.  Leagues in this category include the World Football League, the United States Football League, the World Hockey Association and the American Basketball Association.  The latter name was used multiple times for basketball leagues and Rust covers all of them.

The teams also cover a wide range of geography and unusual names, such as the Minnesota Fighting Pike,  This team’s name, even though it lasted only one season in 1996, is still considered to one of the top ten names in the history of Arena Football. Interesting trivia like this make the book entertaining – at least more so on top of the stories of why the various teams failed.  As mentioned, it usually was due to poor management, a lack of fans or a lack of money.  That isn’t always the case as Rust also includes some incidents of criminal behavior and the sad story of a college basketball team that was popular on campus and played very well but was not well-received by the town because of the presence of black players so they ceased operations after only two years.

Because this is a collection of stories about these teams, the book can be read in as short or long a session as a reader wished.  The usual characteristic of a book structured like this also is true – namely, that not every story will be a terrific one for every reader.  Also, as Rust notes in the epilogue, he doesn’t write about all the failed teams and leagues because there are just so many.  So he had to use his judgement while doing his research on which ones to include. Overall, this is a very good book for readers who, like me, are fascinated with stories about teams that had a very short life in the world of professional sports.

I wish to thank Mr. Rust for providing a copy of the book in exchange for an honest review.