Review of "The Last Stand of Payne Stewart"

While this review comes two weeks after my favorite golf tournament of the year, the US Open, I still felt that this was a good time to review an advance copy of an upcoming book on Payne Stewart, the popular golfer who was killed in a plane crash nearly 20 years ago.  Here is my review of "The Last Stand of Payne Stewart" 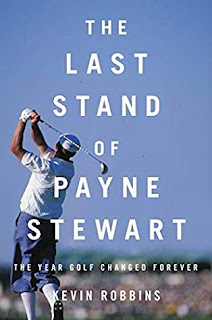 
Payne Stewart was one of the most popular and most interesting people on the professional golf tour in the 1990’s. His tragic death in a plane crash in 1999, just weeks after being a member of the famous American Ryder Cup team that made an incredible comeback on the last day of matches to regain that award from the European team. Payne’s golf career and life are chronicled in this excellent book by Kevin Robbins.


While the format of the biography does follow Stewart’s life without much jumping around, what set this biography apart from others was partly Stewart’s very interesting career with its ups and downs and Robbins’ delicate manner in which he handles telling the story. Stewart was not an ordinary professional golfer. The most known aspect of his golf career was the headwear and plus four pants he wore on the course.  It is not as well known why he wore these and this book tells the tale of Stewart’s father stating that in order to become famous, one must stand out. Payne took that advice to heart and his father was never far from his thoughts, something Robbins illustrates in a touching manner several times in the book.


As for Payne’s golf career (Robbins always calls him “Payne” in the book, never “Stewart”), its ups and downs are covered thoroughly in the book as well. Early on, even when Payne started achieving some success and eventually winning his first major tournament in 1991, he often came across as brash and even uncaring at times. It did lead to bouts of depression that he was able to overcome with the help of his wife Tracey. She is portrayed as the rock of their family as she was able to help Payne both on and off the course. I especially enjoyed reading about the putting drill she made Payne go through to work on that aspect of his game, as it is mentioned several times, including Payne’s most memorable and satisfying win, the 1999 US Open at Pinehurst #2.


Of course, the plane crash that took Payne’s life was covered in great detail as well. The book starts and ends with that event and no matter what aspect of that tragedy is discussed, it is told in the same manner as the rest of the important events in the life of Payne Stewart. They are told in a way that a reader will not only feel close to Payne and Tracey, but also that he or she is reading about a person who is truly HUMAN with all the highs and lows that all people experience but is also one that who is loved and whose loss is still being felt nearly 20 years after his death.


I wish to thank Hachette Books for providing a copy of the book via NetGalley in exchange for an honest review.