Review of "Mantle" The Best There Ever Was"

I might be considered an unusual baseball book consumer because until I read this book, I had never read a book on Mickey Mantle from cover to cover.  I had tried a couple others but didn't finish them.  However, I really enjoyed this one.  Here is my review of "Mantle: The Best There Ever Was." 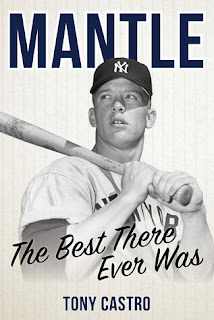 
“Mantle: The Best There Ever Was” by Tony Castro


Not much needs to be said to introduce readers to Mickey Mantle. No matter the age of a reader or how much of a baseball fan that reader happens to be, Mantle is one of those personalities who have become larger than life, long after death and even when all of his shortcomings have been revealed.  However, there may still be readers who have not read much on the man and if you fall into that category, as I did before obtaining this book, then “Mantle: The Best There Ever Was” is a good place to start to understand why he became such a legend – oh, and a pretty good ball player as well.


The book starts with excerpts from interviews with Meryl Mantle, Mickey’s widow, that the author, Tony Castro, promised not to publish until after her death.  Her answers revealed a belief that she had for a long time – that her husband, despite all the issues they had in their marriage, was a good man and also the best baseball player in the history of the game. Having whetted the appetite of the reader with this revelation, Castro makes the pitch why he believes this to be true.


However, that doesn’t come until the last chapter of the book. In between, the reader will be treated to many stories about Mantle told by Mantle himself (from interviews before Mickey’s death in 1995), teammates and his long-time love, Holly Bright.  Through these stories, many of the beliefs that have been passed down are either confirmed or shown to be false. One example of the latter is the belief that Mantle and Joe DiMaggio couldn’t stand each other as there are examples of them helping each other.  Another is that Bright was not close to Mantle after his marriage – the popular belief is that she was his girlfriend in his rookie year of 1951 but then they went separate ways after he married Merlyn.  According to Bright, they were always close and that he really wanted to marry her, not Merlyn.  He only did so because he was afraid to go against his father’s wishes.


That last point is important as that is always a theme in any narrative about Mickey Mantle – that he was loyal to his father and was always aiming to please him (or didn’t want to disappoint him), even long after Mutt’s 1952 death. Putting this pressure on himself to go with the terrible injury Mickey suffered in the 1951 World Series (another chink in the legend of DiMaggio and Mantle disliking each other) made Mantle a tragic hero even with his extraordinary accomplishments on the field.  Castro also points out that this image of Mantle was further enhanced by the growing popularity of television as it brought Mantle to the homes of millions of boys and their fathers who ended up worshipping Mantle as their hero.


Finally, the book goes back to the point made in the title – why the author and Mantle’s widow believe he is the greatest baseball player to every step onto the diamond. Castro uses sabermetrics to make this point – at least that Mantle was superior to Babe Ruth. However, that is only part of the story why he states this. Castro also points out that so many of Mantle’s peers also made this claim and that Mickey’s championship pedigree should also be considered when making this statement.  The reader will then be able to judge whether he or she agrees with Castro or not.


Because this reviewer had not previously read a complete book on Mantle or any of Castro’s previous work on Mantle, the material felt fresh and was very entertaining and easy to read. Readers who have read other books on Mantle may not gain new information and even feel that because these stories are just that – stories – they may not pass as completely factual.  While that is a fair point, readers who just enjoy reading about this legendary New York Yankee will want to read this one, no matter how much they think they know about him.


I wish to thank Roman and Littlefield for providing a copy of the book in exchange for an honest review.