Review of "Off Speed"

Thanks to including audio books on my reading/listening list, I accomplished a rare feat - finishing three books in three days.  This last of the three was a decent collection of stories set against the backdrop of a perfect game.  It is probably better to read this one in the hardcover or on an e-reader than to listen to the book, despite having an excellent narrator. Here is my review of "Off Speed" 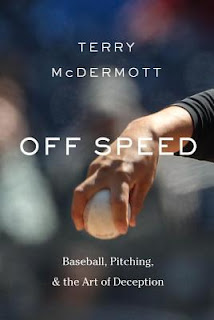 Title/Author:
“Off Speed: Pitching, Baseball and the Art of Deception” by Terry McDermott, narrated by Joe Barrett
Tags:
Baseball, professional, Mariners, memoir, audiobook
Publish date:
May 16, 2017
Length:
224 pages
Rating:
3 of 5 stars (okay)
Review:
Pitching has changed much over the history of the game of baseball.  From tossing the ball slowly so that the batter can easily hit it to pitchers who can throw the ball over 100 miles per hour and make it curve in violent changes of direction, pitching has evolved.  The balls that change direction usually travel slower than the fastball and hence are called “off speed” pitches. This book by Terry McDermott and narrated by Joe Barret takes a look at these off speed pitches.

Some of the pitches are widely used today, such as a slider or a change-up, and some are no longer used for various reasons, such as a screwball.  Whether or not they are used, McDermott writes about nine different off speed pitches, one for each inning of the game that is used for the background of the story.  That game happens to be the perfect game thrown by Seattle Mariners pitcher Felix Hernandez in the 2012 season.

McDermott also talks about his Mariners fandom, his lack of ability to play the game and some other baseball stories that are entertaining (my favorite was attempting to dry a wet baseball field) and intertwined throughout the book.  While these stories were mostly good, I found them a distraction to the theme of the book, namely learning about the off speed pitches and the progress of Hernandez’s masterpiece.  This may read better in a hardcopy or e-book format, but as an audiobook, I found the skipping between stories and information distracting.

One good part of the audiobook was the narration of Joe Barrett. The stories as he read them came across as interruptions, although this was much like listening to a baseball game on the radio.  His voice made him sound like he was a baseball broadcaster.

Overall, this book is a decent one for baseball fans who want to learn a little more about off speed pitches or just want to hear some good baseball tales.  If this took one of these themes or the other, I believe it would have the possibility to be a great book.  Structured as is, it is okay and worth the time needed to listen or read.