Review of "New York Rangers By the Numbers"

The New York Rangers are one of the Original Six teams of the National Hockey League, they have a passionate and loyal fan base and they have a very colorful history. This history is told in a little different manner in this excellent hockey reference book that lists every Rangers player in franchise history by the number.  Here is my review of "New York Rangers By the Number." 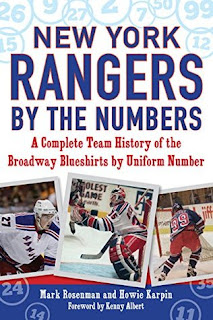 Title/Author:
“New York Rangers By the Numbers: A Complete Team History of the Broadway Blueshirts by Uniform Number” by Mark Roseman and Howie Karpin
Tags:
Ice Hockey, Professional, history, Rangers
Publish date:
January 23, 2018
Length:
498 pages
Rating:
5 of 5 stars (Outstanding)
Review:
There are many different ways an author can write about the history of a particular sports team. One way is by recapping seasons the team was playing, maybe concentrating on the years the team won a championship or at least came close.  Another is by highlighting the greatest players ever to wear that team’s uniform.  Another possibility is to highlight what the team means to its city.

It doesn’t matter if the player played several seasons for the Rangers or only one game, he will be listed in the book. There isn’t a story or some narrative about every player, as there was little material still around for some of the earlier seasons.  Nonetheless, Rosenman was able to at least list those players and record how many games he played for the team.

However, for many of the players, there are interesting stories about their time in New York and the career they had. Most of the short biographies will only talk about the player’s time with the Rangers, even if he had success in his career with other teams.  There are exceptions to this, such as the passage on Tim Horton, whose best years were with the Toronto Maple Leafs. His story included some of his success with the Leafs but the bulk of his story is about the Rangers.

This is best read and used as a reference book, which is how the rating in this review is based. If one wants to learn more about Mark Messier’s time with the Rangers, simply turn to the chapter on #11.  How about the players who were responsible for the team retiring #9 not once but twice?  Both Adam Graves and Andy Bathgate get wonderful write-ups here. How about just a listing of all players who wore #17? They are all listed, from Dean Prentice to Spence Tatchell.  Just about anything Rangers-related that can be told through the number on a jersey will be found in this book. Rangers fans must make this volume part of their library and fans of other teams who want to learn more about Blueshirt history will also enjoy reviewing this – except maybe Islanders fans.

I wish to thank Mr. Rosenman and Sports Publishing for providing a copy of the book in exchange for an honest review.