Having heard Lesley Visser broadcast sports for nearly my entire life, I was happy to see that she has written her memoir. While I knew that her first husband was another broadcaster, Dick Stockton, I didn't realize just how much groundbreaking work she did for women in sports broadcasting.  Here is my review of her memoir with a great title, "Sometimes You Have to Cross When It Says 'Don't Walk' "﻿ 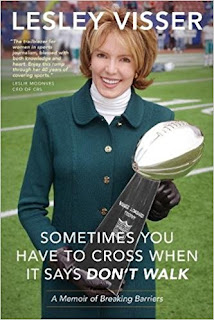 “Sometimes You Have to Cross When It Says 'Don't Walk': A Memoir of Breaking Barriers " by Lesley Visser
Tags:
Football (American), baseball, basketball, broadcasting, women, memoir
Publish date:
December 26, 2017
Length:
200 pages
Rating:
4 of 5 stars (very good)
Review:
Sometimes it is refreshing to read about a person who not only was a pioneer in his or her field, but also genuinely enjoys the work and fame that comes with it.  That is the impression a reader will get while reading this memoir by Lesley Visser, a pioneer in women's sports writing and broadcasting.
Born and raised in Massachusettes, Visser knew early in her life that she was going to have a career in sports.  She was a big fan as a child, kept on following teams while in college when she majored in journalism and landed a job with the Boston Globe covering high school sports.  From there, her career blossomed into one where no matter what sport a fan enjoys, chances are that fan has seen Visser cover it at some point.

She shares many stories about many fellow journalists in both print and television. One of the best is one that is well-known.  She was provided a press pass for one of the most exciting baseball games in the history of the game - game 6 of the 1975 World Series.  It was there that the young writer met Dick Stockton, who was broadcasting the game that night for NBC and he asked her to dinner.  From that start, they became husband and wife.

But that is far from the only great story Visser shares about her career.  Whether she talks about her times with coaches (her favorites are all college basketball coaches - Jim Valvano, Rick Majerus and Rick Pitino), with other players or the many big events she has covered, she tells them with the enthusiasm of a fan but also with the professional demeanor of the award winning broadcaster that she is.

Visser also talks with pride about the many firsts she accomplished as a woman in sports broadcasting, the most notable being the first woman to be enshrine into the Pro Football Hall of Fame in 2006.  Though all of this, she refers back to the talks she had with her mother.  Visser credits her mother with giving her the resolve to pursue a career in a male-dominated industry, with the quote that is the title of the book serving as one Visser remembers for her entire life.

This is a fun and easy reading memoir that sports fans of all ages, genders and sports preferences will enjoy.  Visser's story is a remarkable one of breaking many glass ceilings and one that young women will especially want to read in order to be inspired to continue pursuing their own goals and dreams.

I wish to thank BenBella Books for providing a copy of the book via NetGalley in exchange for an honest review.