Review of "The Killdeer Connection"

Breaking my own rule of only posting reviews of fictional books with a strong connection to a sport, this wonderful legal thriller by Tom Swyers has only a little bit of baseball in the story.  But a baseball scoring play provided an important clue in the story and therefore I decided to publish the review here as well.  This is my review of "The Killdeer Connection" 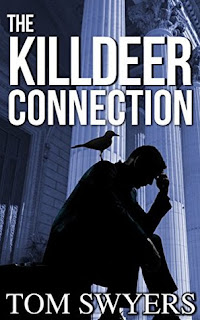 Rating:
5 of 5 stars (outstanding)
Review:
A youth baseball coach learns that one of fellow coaches is dead.  However, not only is the deceased a coach, he is also the key expert in the case that coach/attorney David Thompson is brining on behalf of an injured worker against an oil company.  What happens to David as learns more about Harold’s death makes for a taut legal thriller in “The Killdeer Connection”

That single death leads David along a path connecting railroad, hydrofracking, and Bakken oil production (which produces an explosive gas as well as the oil) that brings him to the oil wells of North Dakota, a long way from his home in upstate New York.  The reader will not only learn about these aspects of the petroleum industry, but will also learn a great deal about David, his family (wife Annie and son Christy, who plays on the team) and Ben, David’s client.  Other characters that play an important role in the story are the town police chief and an FBI investigator, as the story takes unexpected turns when tanker cars explode at every stop David makes, leading to a terrorism investigation as well as the legal case.

The story is very fast paced, is easy to read and does not contain graphic language, sexual references or violence.  I found that aspect refreshing to read in a novel geared for adults as the actions and emotions of the characters were enough to keep the reader engaged.  I found myself hanging on every twist and turn, especially on David’s trip to North Dakota and his discovery of the connection to the killdeer bird to a legal case against an oil company.

There is not much baseball but for a few passages that do connect the sport to the story.  The most fascinating baseball connection is in the letter written by Harold to David using baseball positions.  A play in the scorebook had the odd sequence of 1-2-6-7 – pitcher to catcher to shortstop to left field.  That ended up being an important clue to the investigation into the explosions of the tanker cars.

This book is part of a series that will continue as the ending leaves no doubt that there is more to come in the adventures of David Thompson.  After reading this book, this is a series that I will be following.