While this an older book, it drew my attention when I saw it in the audiobook section of my local library because of the author.  Jonathan Eig has written two of the best sports biographies I have read.  They were about Lou Gehrig and Muhammad Ali.  So, hoping his book on Jackie Robinson would be just as good, I checked it out - and was not disappointed.  Here is my review of "Opening Day." 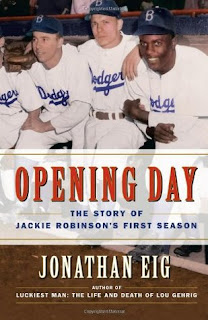 Length:
336 pages
Rating:
5 of 5 stars (outstanding)
Review:
When Jackie Robinson made his debut for the Brooklyn Dodgers on April 15, 1947 it marked a seismic shift in the culture of baseball and America.  How Robinson and his Dodgers fared during that season is the subject of this wonderfully written book by Jonathan Eig. It not only talks about Robinson, but also about how his teammates and opponents reacted to the first African-American player in the major leagues.

In his typical style, Eig not only writes about the season, but also includes much background information that is pertinent to the story.  The reader will learn about Robinson’s childhood, his meeting with Branch Rickey and the discussion they had when Rickey decided that Robinson would be the best man to break the color barrier, and also about some of the mythical stories that have been passed down through the generations.

There are two stories in particular that Eig questions the authenticity of the myths. One is the hug that Robinson supposedly received from teammate Pee Wee Resse.  There are conflicting stories about whether this actually took place and Eig cites many sources that question this event.  The other story that Eig addresses fairly is about Dodger Dixie Walker, who was a Southern man who allegedly was so upset about Robinson’s presence that he was calling for the other Dodgers to boycott the team and would not accept Robinson as a teammate.  That myth is questioned as well and Eig comes to the conclusion that Walker and Robinson at least co-existed peacefully.

Those are just two examples of the complete, balanced and well-researched writing Eig displays throughout the book.  There are also sections on other related topics, such as the opponents for the Dodgers in the 1947 World Series, the New York Yankees.  Even their superstar, Joe DiMaggio, is covered in the book.  There is even a humorous line about DiMaggio’s health issues that season, stating that DiMaggio “was a lot like many European nations at that time – frail and vulnerable.”  Lines like this are occasionally placed in the book and keep it as a fun read as well.
A wonderful book on baseball and society in the 1940’s, “Opening Day” is recommended for all readers who are interested in Jackie Robinson, racial integration or baseball history.