Review of "This Book Has Balls"

Book #2 for the holiday weekend reviews was written by actor Michael Rapaport, who shows that he knows a thing or two about basketball.  Oh, and it is very funny as well.  Here is my review of his book "This Book Has Balls." 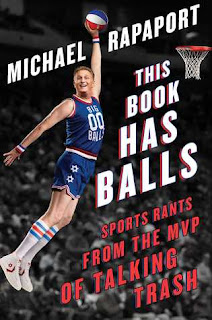 Rating:
4 of 5 stars (very good)
Review:
Michael Rapaport is an actor who knows his sports, especially basketball.  He has a very popular podcast in which he rants on many different sports topics.  Sometimes he is crass, often his commentary is laced with colorful language but he also emphatically makes his point and if doesn’t matter if you agree or not, it’s his way or the highway.

This book is a collection of essays written in the same manner as these commentaries.  Therefore, if a reader is familiar with Rapaport’s style, then he or she will love this book.  For a reader like me, who knows of it and has seen him on television in various roles, then this will be an introduction to his sports side.

The first impression I had was that is basketball cred is outstanding, despite never playing in college or professional basketball.  He writes great essays on Larry Bird, Michael Jordan, Allan Iverson, the New York Knicks and Madison Square Garden, the “mecca” of basketball.  These were my favorite ones and I found myself agreeing with him on just about every story about this sport.

The book is not limited to basketball, however, as he also writes about Tiger Woods, Lawrence Taylor (which I thought was the funniest story), athletes whose prowess in the bedroom as well as the playing arena was legendary, and, in a non-sports rant that surprised me, the Real Housewives series which he believes was great television.

Since his calling is comedy, of course the book is filled with humor, from the beautifully sublime to the crude and obvious.  I mentioned the Lawrence Taylor story, in which Rapaport believes LT is the greatest player in football history because he played while under the influence of cocaine.  That was hilarious as well as some other stories and excerpts.

I will give one more example of this comedy that left me in tears.  To put it in proper context, this is about Shawn Kemp, a star NBA player in the 1990’s who was as well known for fathering children with numerous women as well as his play on the court.  This is about a dream Rapaport had: “I actually had (a dream) a few nights ago that I was playing for the Seattle Supersonics during the Nineties and Shawn Kemp and I were having an extensive conversation on the layup line about getting vasectomies.”

While certainly this book has to be read only by adults because of the language, it is a very funny and entertaining book that is recommended for fans of Rapaport, basketball fans, or those who want to just laugh out loud while reading a book with sports content.

I wish to thank Touchstone Publishing for providing a copy of the book via NetGalley in exchange for an honest review.