Review of "The Natural"

While I have been a baseball lover for most of my life, I had never read this book nor saw the movie version made in the 1980's.  So, when the Goodreads Baseball Book Club made this one of the books to read for November, I thought it was about time that I did so.  I now understand why this is considered a classic baseball story.  Here is my review of "The Natural" 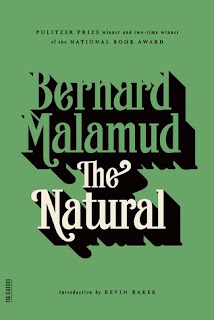 Rating:
4 of 5 stars (very good)
Review:
This tale of a 35-year-old baseball player with extremely gifted talent for the game paints a mostly dark picture of a flawed man.  Bernard Malamud’s 1952 novel about Roy Hobbs and his time playing for the New York Knights is considered to be a classic baseball fictional story and was also adapted onto film in the 1980’s, with Robert Redford starring as Hobbs.  I will add a disclaimer that I have never seen the film, so this review and the opinions within are based only on this book.

I found Malamud’s development of the main characters in the story very good, even though there wasn’t a single character in the story that I could say I felt was a protagonist or a “good” guy or lady.  Hobbs has several character flaws which I believe portray him in a less-than-favorable light, such as always seeking out intimate relations with any woman with whom he is in contact.  One of these women, Memo, was taking a fancy to a teammate of Hobbs who died on the baseball field, Bump Bailey.

Bailey’s untimely demise is the reason Hobbs became a started on the Knights and he immediately tries to court Memo, whose own character flaws are revealed later.  About the only character who seems be able to evoke sympathy from a reader is Iris, and the reason she is initially not Hobb’s type of lady is that she is a young grandmother.  This doesn’t sound like the typical baseball hero in a fictional story – but Roy and all the other main characters are well developed by Malamud.  Maybe the reader won’t like them, but the reader will believe that he or she knows them.

The story moves along well both on and off the diamond.  The baseball scenes are written well for the time depicted, which was when there was no night baseball and the game moved along at a quicker pace than today’s sport with many pitching changes.  There is one big leap of logic, however – how does Roy become such a great pitcher at 19 to strike out the mighty Whammer in a duel, yet later becomes such a great hitter and outfielder at 35?

I must also mention one other character that is baseball-centric, Wonderboy.  That is the name Roy has given to his bat, and he treats Wonderboy better than he treats the ladies, with special polishing and storing.  If there is any character who deserved pity - even though this character is an object – it is the ultimate demise of Wonderboy.  The fact that Roy made sure to bury Wonderboy on a baseball field says a lot about Roy’s relationship with his favorite bat.

The audio version of the book was narrated superbly by Christopher Hurt, who did his best to make the listener feel like he or she is on the field or in the hotel with Roy and company.  While the ending is dark and leaves the reader feeling down, the book certainly does earn a place in the library of classic baseball novels.