Review of "The Backwards K"

Before baseball withdrawal sets in, I wanted to read a quick baseball book between all the requests that have been coming in for other sports.  I found this fictional story on Kindle Unlimited so I gave it a try and loved it!  It's a very good story about redemption.  Here is my review of "The Backwards K" 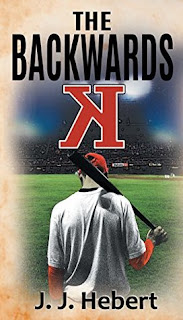 
It is the chance that every kid who has played whiffle ball in the back yard dreams about: bottom of the ninth inning in game 7 of the World Series, your team trails by one run and the fate of the team rests on your shoulders as you come to the plate.


That chance came true for Jet Brine, the lead character in this terrific story by J.J. Herbert. Unfortunately for Jet, the title of the book describes what happened during that at-bat – he struck out on a called third strike – the backwards K.  What happened to Jet’s life after that fateful moment is a continuation of the misfortune of that plate appearance.  Jet’s wife dies, his only son blames his father for her death and cuts off all communication with Jet, he sells memorabilia to keep afloat and he still has an addiction to gambling.


When Jet decides to make changes in his life, this is when the story really gets good as the reader will learn the inner turmoil Jet is going through.  But Herbert doesn’t stop with his character development with Jet.  The reader will also feel the pain that Jet’s wife Janice felt as a baseball wife whose husband chose his career over his family, the pain that Jay Brine felt and the confusion felt by Jet’s current girlfriend Linda.  One other important character in the story is Boone, Jet’s sponsor when he decides he needs to do something about his gambling.  Jet also discovers that Jay is developing into a fine baseball player himself and goes out to make up for the time lost with his son. The reader will enjoy learning about these characters as the story takes many different twists while Jet addresses his issues.


While the story is fairly short on pages, it is heartily filled with emotional ups and downs, some baseball action and an ending that will leave the reader completely satisfied with having read a great tale of overcoming difficulties and enjoying what one has in life once again.