This book needs no explanation about the content or the topic. This is an issue that is saddening and maddening at the same time. It is a book that needs to be read and then those that read it should do what they can to correct the current climate of sexual assault on college campuses.  This is my review of "Violated." 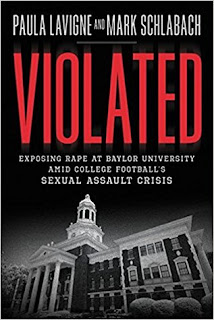 Rating:
5 of 5 stars (outstanding)
Review:
Sexual assaults on college campuses have been a problem that has gained more notoriety in recent years as universities have been held responsible to create a safe environment for women. The institutions have been accused of protecting athletes accused of assault, especially football players.  Baylor University, a Baptist school in Waco, Texas was exposed to enhancing this culture and the investigation into this culture is the topic of this excellent book by investigative reporters Paula Lavigne and Mark Schlabach.

The book begins with stories of unwanted advances, rape and even gang rape of female students by various football players on the Baylor team. The victims are from various backgrounds, races and interests.  The accounts of these attacks are difficult to read – detailed enough to make the reader uncomfortable, but necessary to illustrate the magnitude of the crimes. These victims are followed through most of the book as their lives are changed forever.  Those that were brave enough to come forward then faced more problems on several fronts. Whether it was Baylor officials not believing the victims, assailants being protected by coaches and other school officials, or investigations that ranged from incomplete to poor, the book shows the lack of compassion the university gave these young women.

As for the players, they are not given any slack by the authors – they are held responsible for their actions and the excuses or protection provided by the university’s athletic department are exposed for the obstruction of justice that they are.  The football coach and athletic director eventually lose their jobs over this issue.  Other players who are not accused or took part in any of these assaults for the most part are not affected, but those who would protect teammates or accuse the victims of lying or consenting are criticized just as much as those who assaulted the women.

Even more than the players, however, is the harsh criticism that Baylor University took by the authors and it was well-deserved.  In addition to the aforementioned lack of sympathy for the victims, the compliance with Title IX, the federal law that promotes gender equality on college campuses, was poor as well. The authors expose Baylor’s reporting of sexual assaults and subsequent interviews and closing of cases that left a lot to be desired. The people responsible are many and not just those in the football program.  Like most scandals, the responsibility comes from the top, as college president Ken Starr (yes, THAT Ken Starr) had to give up the position.

While this was a very difficult book to read on all fronts and in all chapters, it is one that is necessary to read in order for one to comprehend the scope and horror of the sexual assault crisis. The reader will not only be angry at the men who assaulted these women, it will be clear to the reader that the university must bear the ultimate responsibility for the victims and must work to change their culture.

I wish to thank Center Street for providing a copy of the book via NetGalley in exchange for an honest review.