Having been in a bit of a reading slump, the best way to get out of it is to pick up a book by an author whom I like.  This book is written by Jack McCallum, considered to be one of the best basketball authors today.  This did the trick - it was a great book on two legendary teams.  Here is my review of "Golden Days." 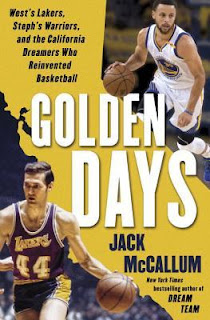 Rating:
5 of 5 stars (outstanding)
Review:
Two of the best teams in the history of professional basketball are the 1971-72 Los Angeles Lakers and the 2016-17 Golden State Warriors.  Both teams had lengthy winning streaks – Golden State had a 24 game streak and the Lakers had a 33 game streak that still stands as the longest winning streak by a professional team in the four major sports.  Both teams won their respective championships.  Both teams had several all-star players on the roster.  The comparison between the two teams is captured in this wonderfully written book by Jack McCallum, considered one of the better basketball authors in the business.

There is one link between the two teams from different eras – Jerry West.  West was one of those all-star players on that Lakers team, and was relieved to finally win a championship after many years of finishing second to either the Boston Celtics or New York Knicks.  After his playing career, he worked in the front office for several teams, but his best work was with the Warriors in putting together the team that includes Steph Curry, Kevin Durant, Klay Thompson and Drayman Green.

The book is fast paced, has many humorous passages and is a wonderful looks back at both teams’ construction and the championship seasons.  One chapter is dedicated to each game of the Lakers’ historic winning streak – this was my favorite section of the book as a reader will either have great memories of the team or, if too young to have seen this team, will learn what the culture of professional basketball was at the time and the colorful characters that made up the Los Angeles Lakers.

This doesn’t mean McCallum shorts changes his quality work for the Warriors either.  The reader will learn how the Warriors went from laughing stock to domination through the hard work of new-thinking owners, sheer luck on draft night in 2009 that allowed them to draft Curry and how they have become the hip team of the current basketball culture.  I enjoyed reading about this team as well, mainly because McCallum writes in such a manner that he shows great respect for both teams without the book coming off as a love fest for either one of them.  It is simply a lot of great information and stories about two legendary teams. This book is highly recommended for all basketball fans of all ages.

I wish to thank Ballantine Books for providing a copy of the book via NetGalley in exchange for an honest review.