Review of "S is for the Stanley Cup" - children's book

I was thrilled to receive a request to review a children's hockey book.  Last spring, I took my grandson to his first hockey game and he had a blast.  I am visiting him again in a couple weeks and I plan on going to another one with him.  Thanks to this request, I now have a book to help him learn more about the game as well.  Here is my review of "S is for the Stanley Cup." 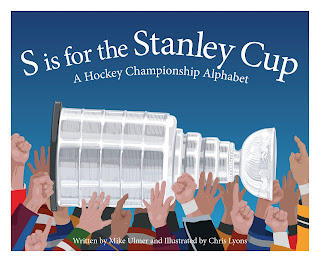 Rating:
5 of 5 stars (outstanding)
Review:
The Stanley Cup is one of the best known and much loved championship trophies in sports.  It has a colorful history and many interesting tales outside of the hockey rink.  In this book written for children ages 6 to 9, Mike Ulmer tells this history and some other related hockey poems in poems that start with each letter alphabetically.  To go with each poem, a short story consisting of one or two paragraphs will further explain the word used to start the poem and its importance to hockey.

While most of the letters are devoted to the Stanley Cup, there are poems and stories about players, funny events with the trophy such as baptizing babies and even a parade of Zambonis. The latter is the last page of the book and describes the 1997 Zamboni parade in St. Paul, Minnesota to celebrate being awarded a franchise before a new arena was built.

While the stories and poems make for fun reading by themselves, the illustrations by Chris Lyons are the best features of this book.  The drawings of famous players such as Jacques Plante, Wayne Gretzky and Mark Messier are especially impressive as Lyons is able to capture their facial features in good detail so that adults who are reading along with the child will be able to easily recognize these players.

If a child is interested in hockey, then this book is one that he or she should read. The child will learn a lot about the game and smile at some of the funny stories and have that learning enhanced by the wonderful illustration.

I wish to thank Sleeping Bear Press for providing a copy of the book in exchange for an honest review.