Review of "Hell With the Lid Off"

I am always grateful for the publishers who regularly allow me to review their books. One of them, University of Nebraska Press, has been very supportive of this blog and the reviews for several years now and they always let me know their upcoming books.  When I saw this one, not only the title was attention-grabbing but so was the subject.  One of the best rivalries in pro football is the subject during the era when I believe the sport was at its best.  Here is my review of "Hell with the Lid Off" 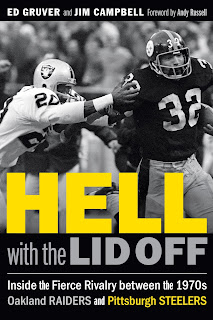 
“Hell With the Lid Off: Inside the Fierce Rivalry Between the 1970’s Oakland Raiders and Pittsburgh Steelers” by Ed Gruver and Jim Campbell


Sometimes the best rivalries in sports are not necessarily the longest lasting ones, but shorter ones between two excellent teams in their times when they play several meaningful games. Such was the case in the 1970’s with the Pittsburgh Steelers and the Oakland Raiders. They met each other in the playoffs every year between 1972 and 1976, with the winner between them ending up as the Super Bowl champion three of those five years.  Both teams played hard-nosed, hard hitting football, drafted many future Hall of Famers and provided fans with very memorable playoff games. Those five years of the Steeler-Raider rivalry are captured in this excellent book by sportswriters Ed Gruver and Jim Campbell.


Because Campbell is not only a writer but also was an employee of the Steelers during this time frame, the book does slant a little toward more coverage of the Steelers than the Raiders. But that doesn’t mean Oakland get shortchanged in the excellent writing, detailed accounts of their seasons, or interesting stories on their best players. Both teams are praised for their play on the field, their smart drafting, and their coaching staffs from the head coaches (Chuck Noll and John Madden) on down, both teams are given their proper due for their success in the 1970’s.


The book’s tone is set early on.  The first chapter is an excellent account of one of the most famous plays in NFL history, the “Immaculate Reception” when Steelers rookie Franco Harris caught a deflected pass just before it would fall incomplete and ran it all the way for a touchdown to give the Steelers a 13-7 victory over the Raiders in the 1972 AFC divisional playoffs and begin what would be the fiercest NFL rivalry over the next five seasons.  Every aspect of that play was dissected and each of the main players involved not only shared his recollection of the play but was also portrayed in that chapter.  Then the book provides insight into the two owners and their very different philosophies on how to win, Art Rooney of the Steelers and Al Davis of the Raiders.  After them, each season of Raider and Steeler football is recapped along with their playoff matchup and the Super Bowl results on the three times one of them won that game during this time frame covered.


This book does a wonderful job of portraying both franchises and its players and coaches throughout the entire five year stretch and concentrates strictly on the football. There is very little commentary on the social or political situations of the cities or the nation at the time. That is what makes this book one that hard-core football fans of that era will want to read, even if they are not fans of either one of these teams.  That includes this reviewer – I did not care for either of them but respected their success and reading about them brought back some great memories of their classic battles.