Memoirs are probably the most common format of sports books that I review and while this one isn't all that different in format and content than others, it came across as the most honest story told by an athlete about himself.  Here is my review of baseball pitcher Barry Zito's memoir, "Curveball" 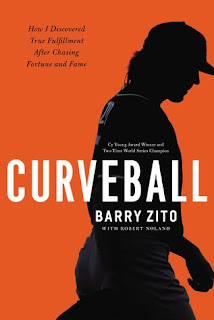 
“Curveball: My Story of Overcoming Ego, Finding My Purpose and Achieving True Success:” by Barry Zito


Barry Zito was a star pitcher in the early 2000’s for the Oakland Athletics, winning a Cy Young award and was part of the excellent staff for the Athletics that allowed them to compete with teams from bigger markets at the start of the Moneyball era.  His success in Oakland turned into a big payday for him when he signed a contract before the 2007 season with the San Francisco Giants, which at the time was the biggest contract awarded to a pitcher. He did not come close to the same success with the Giants that he did with the Athletics.


It is at his lowest point during that time with San Francisco, when he was left off the postseason roster during the Giants’ 2010 championship run, that this book starts and from there, Zito takes the reader inside not only his career, but his entire transformation – both when he was a high school and college pitcher when he was always following the advice of his father on the best course to take and also near the end of his career, when he, with the help from his wife and Giants team chaplain, to follow the advice of God and turn to his Christian faith to guide him on the best decisions to make.


The book really was not much different in structure or in types of reflection than other sports memoirs.  Zito’s reflections on family, the role of his father in his career, his transgressions in excessive living life in the fast lane, and even his decision to reaffirm his faith and let that aspect of his life become more important and prominent. All of these aspects, as well as his discussions about his performance on the mound, are all present in other sports memoirs.


So what makes this one different?  Readers will immediately realize how refreshingly honest Zito writes without embellishment or exaggeration.  There wasn’t a single passage in which I felt that Zito was not being completely honest with his audience and hearing him describe some of his inner struggles with trying to please his father, just for starters. It went as far as him transferring from a four-year college (UC Santa Barbara) to a junior college because, according to Zito’s father, Barry had a better chance to be a first round draft choice playing at a junior college. When he still wasn’t a first round draft choice, he transferred to another four-year school and then was a first round pick for the Athletics.  The role of his father is told completely and with nothing held back by Zito.


This information about his father and the completely unfiltered version is also present in every aspect of his baseball career and his devotion to his faith. There is a good balance in all of these aspects of his life up to the best story of the book which is near the end.  Zito won two World Series rings with the Giants – 2010, when he was left off the postseason roster as mentioned earlier and in 2012, when he was pitching better and won a World Series game as the Giants swept the Detroit Tigers. He shares that of the two rings, the 2010 one is more meaningful to him.  If this doesn’t make sense, once one reads this honest assessment of himself, it is easier to understand why he believes this.


Any fan of baseball, of honest memoirs, or just of a good read will want to read this one.  Don’t expect anything amazing or provocative – just a truly honest reflection of a baseball career that reached both the highest of highs and the lowest of lows.


I wish to thank Thomas Nelson – W Publishing for providing a copy of the book via NetGalley in exchange for an honest review.