Review of "Most Valuable"

One would be hard pressed to find another player who is as important to the NHL as Sidney Crosby has been since he came into the league in 2005.  There might be other players with more talent or skill, but in terms of sheer importance to the game itself, this book makes a strong case that Crosby has played a significant role in the game.  Here is my review of "Most Valuable" 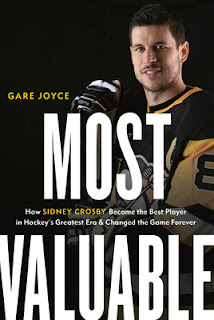 Title/Author:
“Most Valuable: How Sidney Crosby Became the Most Important Player in Hockey History” by Gare Joyce

Review:
Sidney Crosby has been the face of the National Hockey League (NHL) since his rookie season of 2005. While he may not have the statistical excellence of Wayne Gretzky or changed the play of a positing like Bobby Orr did for defensemen, but sports journalist Gare Joyce, who earlier had penned a biography of Crosby, makes the case that Crosby has transformed the entire league into a league that he may not have been able to succeed in.

If this sounds confusing, then one must read this book as Joyce covers all levels of hockey in which Crosby has excelled – pee wee hockey and the Canadian Junior league as well as his time at Shattuck-St. Mary’s in Minnesota and of course his time with the Pittsburgh Penguins, the only NHL team for which he has played. As an American reader, I was appreciative of the description of Crosby’s time in juniors as it is very detailed about not only Crosby nearly single-handedly leading a less talented team to a championship but also the structure and the cut-throat nature of junior hockey.

Something else that was noted throughout the book is that Crosby is one of the very few players who have had successful hockey careers learning the game in a Maritime province – in Crosby’s case, he hails from Nova Scotia.  While it is well known that the Maritimes have not produced many hockey stars, it was interesting to learn that many consider coming from that area a handicap in one’s hockey career.

Joyce gives Crosby a lot of credit for leading the NHL away from the defensive style of hockey it played in the 1990’s and early 2000’s thanks to the success of the New Jersey Devils with their infamous neutral zone trap and into a game that emphasizes speed, puck handling and skill. The transformation into this type of game has been so successful that players like Connor McDavid and Nathan McKinnon, the latter whose skills are described in great detail in the book.  If there is a downside to reading the book, it would be that while Joyce writes about the hits that Crosby took in which he suffered debilitating concussions resulting in the loss of significant playing time, Joyce doesn’t write much about a possible solution or at least how the issues of concussions will be addressed.

Readers who are fans of Crosby or of today’s style of hockey played in the NHL will want to read this book.  Even if they are Crosby critics, and Joyce acknowledges them and doesn’t dismiss all of the criticisms, this book is one to read to learn why Crosby has to be considered one of the greatest players in the history of the game.

I wish to thank Viking Publishing for providing a copy of the book via NetGalley in exchange for an honest review.
Book Format Read:
E-book (Kindle)