Review of "Lady Tigers of the Concrete Jungle"

While I have written a review of this book, words really can't describe the incredible uplifting feeling one will have when finishing this book.  A rag-tag team that eventually was honored at Yankee Stadium, the Mott Lady Tigers are a softball team that meant so much more than just the sport itself.  Here is my review of this book. 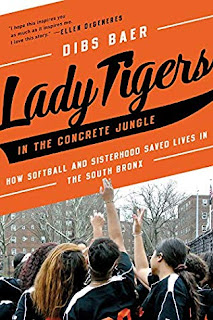 
“Lady Tigers in the Concrete Jungle: How Softball and Sisterhood Saved Lives in the South Bronx” by Dibs Baer

Review:
It isn’t often that a team in any sport that goes 1-6 for its season will have a book written about it. However, the story of the very first girls’ softball team for Mott Middle School in the South Bronx is truly inspiring for not only the players, many of whom had incredible challenges in their lives but also for the coach who wanted to make a difference in the lives of these girls.  How the team was formed and their amazing journey is the subject of this wonderful book by magazine writer and editor Dibs Baer.

Mott is not just any middle school – it is one of the most violent, statistically underachieving schools in the nation.  The neighborhood is known for its gang activity and violence and the students who live in that environment bring it with them to school. Fights among all students are commonplace, with many staff members and teachers fearful for their safety. One particularly troubling tale involved a female teacher who was pushed down while eight months pregnant by another student who screamed at the teacher that she hoped that she would lose her baby.  Many stories like this are used to illustrate the atmosphere of the school.

Enter Chris Astacio. Having endured his own troubled past with the death of his older sister, he decided to enter the teaching profession to make a difference in the lives of young people. His first position was as a physical education teacher at Mott.  After seeing the atmosphere in which he was working, he decided to start a girls’ softball team. This despite the fact he had no financial backing from school administration, no equipment, no uniforms, and even no players.

The first day of tryouts was held in the gymnasium with only a Wiffle ball and bat. A few girls showed up, at first just because it was another way to avoid class or authority. Slowly but surely not only did more girls join the team, Coach Astacio was able to raise funds for equipment and uniforms. His players all had their own unique heartbreaking stories and they all had various issues, from failing grades to less than ideal home situations to violence (one player loved to fight anyone who dared look at her wrong) to sexual abuse.  While it was hard to read some of these stories during the book, it made their eventual journey all that more satisfying.

It should also be mentioned that no only did Astacio lose his sister, he was also a stomach cancer survivor. This made him even more determined to make this softball team a success and something that would provide a positive atmosphere and experience for the players who have endured so much. This dedication, and the strain it put on his marriage and home life, is told in rich detail by Baer.

“But what about the team?  How did they do?”  Well, as one might expect, they struggled on the field to start, losing badly in their first game.  As they played more, they got better but still did not win a game.  However, in their last game of their first season, they had to finish against another Lady Tigers team, this one more experienced and the one that gave them that big loss in the first game. No spoilers as I won’t give away the score, but it is safe to say that the Mott Lady Tigers team in that rematch was certainly more unified, more skilled and more ready to play even though the people were the same.

It is often said that sports can bring people together from a wide range of backgrounds.  This softball team is a great example of that concept coming true and the inspiration a reader will feel while navigating the pages of this team’s players and coach is truly remarkable. I was talking back to the book, in the same language (not always clean) that the players use and Baer’s use of that dialogue gives it a certain air of authenticity that this story is one of the more remarkable ones in sports.  The team and Coach Astacio have been honored in many ways, including by the New York Yankees, whose ballpark is in that area.  If a reader wants to be inspired, then pick up this book.

I wish to thank Pegasus Books for providing a copy of the book in exchange for an honest review.
Book Format Read:
E-book (Kindle)

Buying Links:
https://www.amazon.com/Lady-Tigers-Concrete-Jungle-Sisterhood/dp/164313065X/ref=tmm_hrd_swatch_0?_encoding=UTF8&qid=&sr=
Posted by Lance Smith at 8:43 AM