It is always great to read a book about a team, event or athlete about which I had little or no previous knowledge.  I had heard about Duke Kahanamoku during an Olympics broadcast and the announcers would talk about past American swimming champions. Beyond that, I knew nothing.  Thanks to this book, I know a lot more about this man and his story is one that should be read by all.  Here is my review of "Waterman" 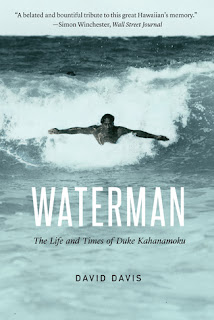 Title/Author:
“Waterman: The Life and Times of Duke Kahanamoku” by David Davis


Review:
Swimming is a sport that usually has the attention of the sporting world only once every four years during the Summer Olympics. Thanks to the television coverage of the Olympics, many fans are familiar with names like Mark Spitz, Janet Evans and Michael Phelps.  However, long before these swimmers gained fame there was a man who started in the backwaters in Hawaii when it was still an American territory to become the first true American superstar in the sport. Duke Kahanamoku’s story is told in this well-written, well-researched book by David Davis.


Duke’s life is covered from beginning to end, starting with his childhood in Hawaii when the Queen is overthrown and the islands become an American territory. His love of the water began at an early age, and he was determined to represent the United States in the Summer Olympics. This was despite poor treatment by many white Americans on the mainland as he endured the same racism as black Americans because of his darker complexion.  Nevertheless, Duke represented the country in three Summer Olympics, with his best showing coming in 1920 (the second of his three Olympics) by setting many records that lasted more than a decade. Especially interesting in Duke’s swimming career was the passing of the mantle of the best American swimmer from Duke to Johnny Weissmuller.  Instead of a rivalry, it started a long-time friendship between the two competitors.


While Duke didn’t surf competitively, he not only brought the sport popularity in his native Hawaii, he also brought surfing to the California Pacific coast, where his work on promoting and exhibiting surfing was very well received.  He considered California a second home and did pique his interest in acting.  He didn’t have the success in that career that other swimmers such as Weissmuller and Buster Crabbe had, but it is noted that he still enjoyed the experience.


While the passages about Duke’s swimming, surfing and Olympic feats were excellent, so were the pages about other aspects of his life. His many jobs in acting, politics (his best-known accomplishment was being elected as a local sheriff) and other business ventures helped the reader learn the complete man, who was always considered kind and thoughtful, even when political opponents would criticize him.  He married later in life and enjoyed that lifestyle in his later years.  These parts of the book are also well researched and are filled with many details that fully paint the picture of the Hawaiian legend.  This is a book that people interested in water sports or Hawaiian culture will want to add to their libraries.