Review of "Collision of Wills"

After a death in my family that took me away from reading and reviewing, it is time to get back into the swing of things with books. I read this book on the plane trip to be with family members and now am writing the review.  It was a decent read on two legendary figures in professional football.  Here is my review of "Collision of Wills" 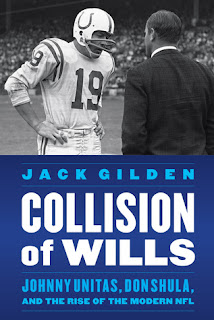 Title/Author:
“Collision of Wills: Johnny Unitas, Don Shula and the Rise of the Modern NFL” by Jack Gilden


Review:
Johnny Unitas and Don Shula are two legendary figures in the history of professional football.  The former is a Hall of Fame quarterback who played most of his career with the Baltimore Colts.  The latter played as a defensive back for multiple teams, including the Colts where he was a teammate of Unitas.  Shula became a coach when his playing days were over, leading the Colts and Miami Dolphins to titles and becoming a Hall of Fame coach.


The relationship between the two men ranged from tolerable to frosty whether they were teammates or Shula was the head coach and Unitas was his quarterback.  The relationship between these two men is explored in this book by Jack Gilden. This is the best aspect of the book as Gilden uses interviews from many different people with different connections to the two men. These vary from Colts teammates to Joe Namath, the Jets quarterback who led his team to an upset victory over the Colts in Super Bowl III.  The Colts were coached by Shula and Unitas played in that game in relief of starting quarterback Earl Morral.


Like many books about sports in the 1960’s, which is when most of the events took place, it mingles the sport with the culture of the time. These include the Vietnam war, the sexual revolution and the civil rights movement.  There is a lot of text devoted to these subjects and while interesting; I felt that at times these took the focus away from the main subjects of Unitas and Shula.

However, when concentrating on them or on the history of the Colts, this is an excellent source of information.  In addition so learning more about Unitas and Shula, a reader will learn more about the eccentric owner of the Colts at that time, Carroll Rosenbloom (who later traded the ownership of the team to Robert Irsay in exchange for ownership of the Los Angeles Rams).  Weeb Ewbank, the man whom Shula replaced as head coach of the Colts, is also portrayed, and he comes across as sympathetic figure – until he coaches the Jets to the win over the Colts in the Super Bowl.


Overall, this is a very interesting and informative book on the Colts and the two legends who played an important role in making the Colts one of the best teams during the 1960’s.  Their role in changing the landscape of professional football cannot be overlooked and this book informs the reader of their importance.


I wish to thank University of Nebraska Press for providing a copy of the book via NetGalley in exchange for an honest review.