Review of "Gratoony the Loony"

When I heard the name Gilles Gratton, I immediately thought of his very cool lion mask.  When I saw he wrote a memoir, I was anxious to read it.  When I saw ARC's offered on NetGalley, I jumped at the chance to obtain one.  It lived up to all my expectations.  Here is my review of "Gratoony the Loony" 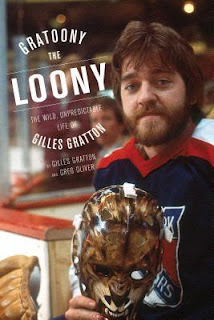 
Review:
Hockey goaltenders are often considered to be a little different than other players because of their superstitions, rituals or other idiosyncrasies they may perform.  One of the more colorful characters to have played this position is Gilles Gratton, who played primarily in the 1970’s for the World Hockey Association’s (WHA) Toronto Toros and the National Hockey League’s (NHL) New York Rangers.  His colorful career and life is captured in this memoir co-written with Greg Oliver.


More than any accomplishments he did on the ice, Gratton is best known for two eccentric items.  One is his lion mask, one of the best known masks ever worn by a goalie.  He shares the story of the idea for the mask in the very beginning, giving the book a very interesting start.  The inspiration was easy – Gratton’s zodiac sign is Leo, so he felt a lion mask would be appropriate.

The second item for which Gratton is known is taking the ice wearing only his mask and skates. This occurred when the fad of streaking was in vogue, so he decided to do so on a bet.  This is also a story he shares in which the legend to which it grew to did not match the actual events.  He doesn’t spend too much time on this incident, but he has plenty of other material that fits the title here. Gratton shares many stories of wild times in both leagues both on and off the ice.

The writing is very good for a sports memoir, something that is typical for Oliver.  His contribution to the book can be found throughout the memoir and is the perfect fit for Gratton’s carefree discussion of his hockey career, his escape to practice transcendental meditation and his relationship with his parents, wives and children. This book was as fun to read as it was to watch Gratton play during his career.  Fans of the sport during the 1970’s will want to add this one to their libraries.

I wish to thank ECW Press for providing a copy of the book via NetGalley in exchange for an honest review.