Review of "Drive for Five"

Just when I thought there wasn't anything else that could be said or written about last February's Super Bowl, here came a book about the New England Patriots on NetGalley.  Of course, the 2016-17 Patriots are one of the more remarkable teams in recent years, so I picked up the book and it was even better than I hoped it would be.  Here is my review of "Drive for Five." 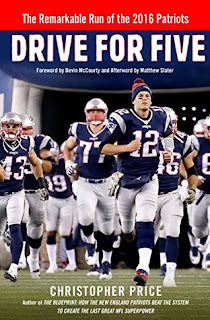 Rating:
5 of 5 stars (outstanding)
Review:
The New England Patriots have been one of the most successful franchises in all of professional sports in the last fifteen years. They have won five Super Bowls in that time frame and the latest one, Super Bowl LI, was the biggest comeback win for any team in Super Bowl history. The story of that championship season for the Patriots is captured in this well written, well researched book by Christopher Price.

This championship was probably the most unusual of the five for New England because of the controversy and turmoil surrounding the team through most of the season.  It started when quarterback Tom Brady was suspended for four games after the investigation into the “Deflategate” controversy.  It continued with the sudden trade of linebacker Jamie Collins to the Cleveland Browns and even ventured into the tumultuous 2016 presidential election when Donald Trump mentioned Brady and coach Bill Belichick during the campaign.

Despite all this, the Patriots managed to win three of the four games without Brady and maintain a professional demeanor off the field and a winning performance on it. How they did it is captured beautifully through Price’s writing. His access to the players and coaches was a key factor in bringing the reader inside the team’s locker room (his account of how a player is picked to get “The Locker” was great writing) and the players’ insights.

Much like the season on the field, the book builds to a climax as the Patriots earn the top seed during the regular season, win two playoff games, then pull off the incredible comeback against the Atlanta Falcons. There is no need to recap all of those games in this review – the book does a fantastic job of doing that.  Even though readers will most likely already know the results, it felt like reading a dramatic novel when the Patriots were making their historic run in the fourth quarter and overtime of Super Bowl LI.

Something that makes this book stand out is all parts of the entire team – offense, defense and special teams – are featured in the book.  While Brady captures a majority of the text (much like any quarterback dominates the play and coverage of professional football today), Price does a very good job of featuring others such as Collins, running back James White (whom Brady himself said should have been the Most Valuable Player in the Super Bowl) and kicker Steve Gostkowski.

There are passages in the book where Price does show a bit of “homerism” toward the Patriots, such as a passage in which he believes there is a double standard on offensive pass interference calls on tight end Rob Gronkowski. There are not too many of these to make the book too much of a “homer” book and as is the case with many books about teams or players that have long stretches of success, there is a little chest puffing about the accomplishments.  That is understandable and at times, as it is here, perfectly fine to brag.

This is an outstanding book on a remarkable football team and is one that every Patriots fan will want to read to relive the 2016-17 season.  Even more neutral or casual football fans will enjoy reading about this team and its accomplishments.

I wish to thank St. Martin’s Press for providing a copy of the book via NetGalley in exchange for an honest review.