Review of "A Deadly Game"

It isn't too often that I have the chance to review fictional stories with a sports theme, but that was the case with this book. It took a little different twist in that the baseball theme was less about the game on the field and more about fantasy baseball - a game that is intriguing and has a world all its own.  Here is my review of a thriller about fantasy baseball, "A Deadly Game." 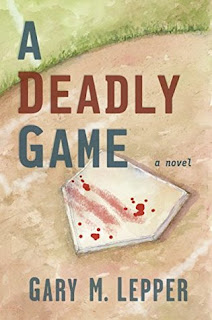 Title/Author:
“A Deadly Game” by Gary M. Lepper
Tags:
Baseball, fiction, fantasy, murder, mystery
Publish date:
December 6, 2016
Length:
299 pages
Rating:
4 ½  of 5 stars (excellent)
Review:
When six Major League baseball players in various cities are injured and two of them died as a result of their injuries, it felt like more than just coincidence.  It raised the curiosity of former police detective David Kenmuir and what he finds while investigating these cases is the storyline for this very entertaining novel by Gary M. Lepper.

Set in the 1980’s, when computers were still primitive but useful for vast amounts of information and statistics, Kenmuir discovers the world of fantasy baseball and how one can get easily caught up in the high stakes at which some fantasy leagues operate.  While he was a baseball fan, Kenmuir did not play fantasy baseball.  However, with the help of a computer nerd, he learns not only about the game, but also starts to understand how the star players each became victims of an organized crime operation.

Baseball fans will enjoy the references to the games and also to baseball card collecting as well as the fantasy game. There are settings in major league ballparks, such as the Oakland Coliseum, in which Kenmuir and a Don from organized crime watch ball games. The story did start a little slow as it was not apparent how the injuries were connected, but once the concept of fantasy baseball was fully ingrained into the story, it took off from there.

The characters were well-developed, and Kenmuir develops into a troubled hero with his experiences in the Vietnam war and the loss of a partner while on the police force playing a key role in the book. The antagonists are well developed as well, and the usual stereotyped behavior of the leaders of organized crime are not obvious in this novel, a welcome relief.

This is a novel that will be enjoyed by fans of book on baseball, mysteries or organized crime. It was a very good read that only bogged down once, but once one gets past that portion of the book, it is one that will be hard to put down.

I wish to thank Phosphenes for providing a copy of the book via NetGalley in exchange for an honest review.