Review of "The Legends Club"

Happy New Year!  I want to thank everyone who visited the blog in 2015 as it has grown a tremendous amount in the two and a half years it has been online.  I am humbled by not only this fact, but also by all the authors and readers who have contacted me to not only request a review or leave a comment but who also have complimented the blog and my review.  Thank you, thank you, thank you.

Therefore, for 2016, it is only appropriate that I start off the year with a review of a book from one of the best writers for college basketball and my personal favorite author of sports books in general, John Feinstein.  His book on Dean Smith, Mike Krzyzweski, and Jim Valvano will be published in March and should be another winner.  Here is my review of "The Legends Club." 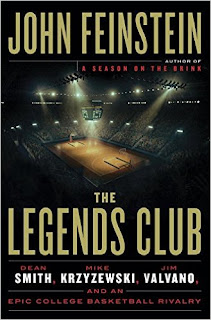 Review:
In 1980, North Carolina was already established as a legendary basketball program with a legendary coach, Dean Smith.  That year, the two biggest rivals of the Tar Heels, Duke and North Carolina State, hired Mike Krzyzweski and Jim Valvano respectively.  That led to a decade of intense basketball between these three schools.

John Feinstein, considered by many to be one of the best writers of college basketball, captures the spirt of this three-headed rivalry by telling the story of not only the successes on the court of these three coaches, but by also exploring what made each one of them so intense despite having distinctly different personalities.

Feinstein is a no-nonsense writer as he tells stories of the recruiting wars between the three, the intensely competitive fire inside each one against one another, and insightful stories that bring the reader inside the mind of each coach. Feinstein gives each man equal time through the years that all three coached.  However, I felt that Feinstein did his best work when writing about the discovery of Valvano’s cancer and all that happened until his death in 1993. The stories have been told before, but not like this. Feinstein should also get extra kudos for getting Valvano’s widow to open up so freely about the loss of her husband. This section made for some of the best reading in the entire book.

Readers who have enjoyed Feinstein’s previous books on college basketball such as “A Season on the Brink” and “The Last Amateurs” will enjoy this one as well. Covering the game and the three schools who were coached by these three legendary coaches in his usual informative style, “The Legends Club” is a book that every basketball fan should add to his or her collection.

I wish to thank Doubleday Publishing for providing an advance review copy of the book through NetGalley in exchange for an honest review.