Books that list the best or worst of something or someone in a particular sport are always fun to read and will most likely leave a reader debating some of the selections.  This book about the best coaches in the history of professional hockey is so much more than just a list.  It is certainly one of the best books I have ever read of this format.  Hopefully hockey fans reading this will get a chance to pick it up as it is highly recommended.  Here is my review of "Bench Bosses." 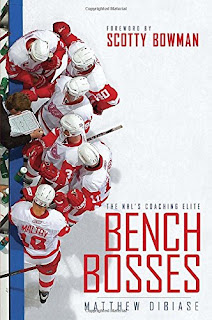 Review:
Most sports books that are lists of the best or worst of something usually follow a tried and true format – countdown to the top spot, a brief biography or recap of the team or player and an explanation why the team or player is ranked at that spot.

Take that format and throw it out the window when picking up this book on the best coaches in the history of professional hockey. Hockey historian Matthew Dibiase devised a format that takes both positive and negative accomplishments by hockey coaches and ranked the best coaches from 1 to 50, with a few extra “honorable mention” coaches.

Hockey fans and historians will appreciate the write ups for each coach, especially those about coaches from the early days of the sport like Pete Green, Art Ross, Frank and Lester Patrick and Ralph “Cooney” Weiland.  Even if the reader has not heard of some of these coaches from many years ago, he or she will appreciate what that coach has meant to the game and what he accomplished after reading that coach’s passage.

Another reason that I believe that this is one of the best books about who is the best at what he does is that Dibiase includes accomplishments in other professional leagues – the Pacific Coast Hockey League and Western Canada Hockey League/Western Hockey League from the early 20th century and the World Hockey Association from the 1970’s. By including a coach’s accomplishments in these leagues as well, Dibiase gives a complete picture of what the coach achieved without shortchanging him because he coached in a different professional league.

Finally, the book doesn’t stop at just ranking these coaches. There are chapters describing who was the best coach in each decade, which coaches often came close to making the Stanley Cup finals but never made it, rivalries and separate short chapters on each of the aforementioned other professional leagues. That gives the book even more credibility as a complete comparison of these coaches over the history of professional hockey.

The book can be read for pleasure or can be used for reference as well.  It is an outstanding record of the best coaches the game has known and should be on the bookshelf of every hockey fan and historian.

I wish to thank Mr. Dibiase for providing a copy of the book in exchange for an honest review.