Review of "The Unlikeliest Champion"

When one thinks of elite programs in college basketball, the first schools that come to mind could include UCLA, North Carolina, Duke, Kansas and Kentucky.  Some believe that now the University of Connecticut should now be included on that list, partly because of their run to the championship in the 2010-11 season.  This book is a recap of that amazing season for the Huskies.  Here is my review of the book: 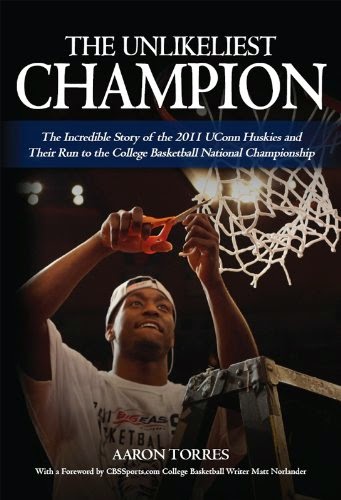 Title/Author:
“The Unlikeliest Champion: The Incredible Story of the 2011 UConn Huskies and Their Run to the College Basketball National Championship” by Aaron Torres

Review:
The Connecticut Huskies have become one of the elite college basketball programs with four national championships in fifteen years.  The most improbable of these occurred in the 2010-11 season.  This book by journalist and blogger Aaron Torres recaps that season for the Huskies and also includes short biographies of many of the players, including All-American guard Kemba Walker.

Walker gets the lion’s share of credit for the team’s success, but Torres makes sure to include all players in the book as he relies on research and his knowledge of Huskies basketball to write a detailed account of not only the championship season, but also insight into many of the players. It made for an interesting and informative book in which I learned a lot about that team.

It should be noted that I made these observations and enjoyed the book even though I am not a die-hard fan of this team.  Because of this, at times I felt it was written in a fashion that not only showed Torres’ fandom, but also that he was talking only to other UConn fans and forgetting that the reader may not have the passion and knowledge that he does.  This isn’t necessarily a bad thing, especially if reaching out to fellow Huskies fans was his goal, but at times it just didn’t feel like a book to simply learn about the team.

The book covers the entire season, and I enjoyed the section on the Huskies’ run during the Big East tournament as well as the championship tourney.  The Huskies’ became the first team to win five games in five days to win that tournament, which some felt was even harder than winning the national championship.  Torres does a nice job of covering both of these and putting them into perspective.

Overall, this is a very good recap of both the season and the key players that made the 2010-11 season one of the more memorable ones for Huskies basketball.  Fans of the team will especially want to read this book.

Pace of the book:
Personally, the book felt a little choppy to me as Torres mixed in chapters on player biographies in between accounts of the 2010-11 championship season. While this is a common format and good for breaks in the “action”, so to speak; my personal preference is for a beginning-to-end continuous recap of the season.

Do I recommend?
This is a good read for college basketball fans, especially fans of the University of Connecticut team.  Torres wears his fandom on his sleeve and it shows in this book. That isn’t necessarily a bad thing if the reader also roots for that team.