While the end of March means the start of baseball season and the excitement of the NCAA basketball tournament, I decided to end the month with another book on boxing - and it was the right choice as this was a terrific memoir by a man who has spent more than 40 years in the sport.  Here is my review of "Glove Affair." 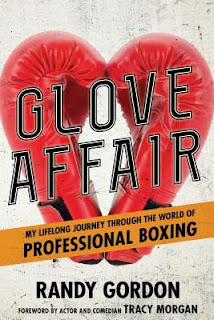 
“Glove Affair: My Lifelong Journey in the World of Professional Boxing” by Randy Gordon


When someone can work in a profession or area that the person loves, then that person is sure to love his or her career. For Randy Glover, he has been loved boxing since he was 11 years old. He was able to take that affection for the sport into a nice career as a boxing writer and editor, broadcaster, ring announcer, radio show host and even a gig as the New York State Athletic Commissioner. Glover talks about each of those stops in this memoir that is sure to please any boxing fan.


With more than 40 years in the sport as not only the top man in New York State, but also as editor of the respected Ring Magazine as well as a respected announcer, Gordon has many excellent stories on boxers of many different weights and eras. The reader will be taken to the modest household of future champion Alexis Arguello when he sensed danger and saved his family from harm during an earthquake in his native Honduras in 1972. There are many stories about Mike Tyson, including the nickname given to him by Gordon that became Tyson’s favorite, “Catskill Thunder.”  Gerry Cooney plays a prominent role in the book – this is especially so as Cooney is currently a co-host of a boxing show on Sirius XM radio with Gordon.


While many of these stories, not only about boxers but also about Gordon himself and his career, are mostly upbeat and happy, Gordon doesn’t ignore the dark side of the sport.  One example occurs in Chapter 7, when Gordon talks about Billy Collins Jr., a promising youngster who took a ferocious pounding in a bout in which the gloves of his opponent were illegally stripped of the padding, resulting in Collins being hit with bare knuckles. While Collins survived the pounding, he never boxed again and soon grew depressed, abused alcohol and other substances and died in an auto accident under the influence. Gordon wrote a powerful editorial in Ring, calling Collins’ death a murder. This type of writing, no matter the mood, is present throughout the book and the professionalism of Gordon’s work is prominently displayed throughout the book. No matter which era of boxing a reader enjoys or which weight classes he or she follows, this book is a must read for anyone interested in the sweet science.


I wish to thank Rowman and Littlefield for providing a copy of the book via NetGalley in exchange for an honest review.