Review of "How 'Bout Them Cowboys?"

The Dallas Cowboys are one of those sports franchises that even non-fans of the sport know about. So, any book about them would be of interest to many people. This one, written by Gary Myers, covers a lot of the history of the team but mostly revolves around owner Jerry Jones.  Here is my review of "How 'Bout Them Cowboys?" 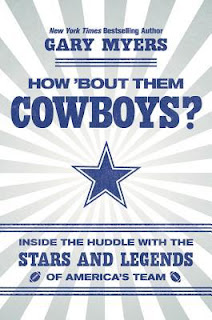 Title/Author:
“How ‘Bout Them Cowboys? Inside the Stars and Legends of America’s Team” by Gary Myers
Tags:
Football (American), Professional, Cowboys, history
Publish date:
October 9, 2018
Length:
288 pages
Rating:
3 ½  of 5 stars (good)
Review:
Love them or hate them, anyone who knows anything about professional football knows about the Dallas Cowboys and their colorful, successful history. This is especially true since Jerry Jones purchased the team in 1989 and immediately fired the only coach the team had to that point, Tom Landry. This book by Gary Myers takes the reader inside world of Jones at various times through his ownership of the team.
The reader will learn much about what makes the owner tick. There is an extensive section about what really happened to the “friendship” between Jones and head coach Jimmy Johnson. Myers explains why Jones fired Landry and yet made the legendary coach one of the first inductees into the Cowboys’ Hall of Fame. The extent of Jones’ reach into the football operations of the team after Johnson left is illustrated in a section about what happened in the draft war room of the team when Jones’ son Stephen and the rest of the Cowboys staff did NOT want to draft quarterback Johnny Manziel when Jerry was absolutely certain that the Cowboys would take the talented but troubled quarterback from Texas A&M.
This is not to say that the book is only about Jerry Jones, although at times the book does read like it should be a biography of the owner. There are some passages that are about other times and people important to the history of the franchise. There is a very touching chapter on life after football for five star players for Dallas from the 1970’s and 1980’s – Tony Dorsett, Ron Springs, Robert Newhouse, Dennis Thurman and Everson Walls. The story of their friendships and health issues was powerful reading and it was my favorite section of the book.
However, the placement of this chapter and other sections that didn’t center on Jerry Jones seemed puzzling – it was like the book was supposed to be all about Jones, then it was realized that there had to be material on other aspects of the history of the franchise, so they were stuck in wherever they might fit.  This gave the book a disjointed feel, which was a shame because the material and stories, whether on Jones or others, was excellent and informative. There was even some humor in the book.  This line about how Bill Parcells became interested in coaching the Cowboys was very funny – “Parcells and Jones have different recollections of who played matchmaker, although they agree it was not Yente from ‘Fiddler on the Roof.’ “
As a football fan who falls into the “hate them” category mentioned at the beginning of this review, I still found the information in the book excellent, but as a great read, it fell a little short. While this book would certainly be of interest to Cowboys fans, anyone who is interested in Jerry Jones of the history of the Dallas Cowboys would also enjoy this.
I wish to thank Grand Central Publishing for providing a copy of the book via NetGalley in exchange for an honest review.
Book Format Read:
E-book (Kindle)
Buying Links:
https://www.amazon.com/How-Bout-Them-Cowboys-Americas-ebook/dp/B079RBXW8V/ref=tmm_kin_swatch_0?_encoding=UTF8&qid=&sr=
https://www.barnesandnoble.com/w/how-bout-them-cowboys-gary-myers/1127924234?ean=9781538762318#/