This book was one in which I thought I knew a lot about the subject matter, but it turned out I knew very little.  Oh, sure, I knew Davey Johnson was the manager of the 1986 Mets, that he had a very good playing career with the Orioles, Braves and Philles and that he managed three other teams - in each case taking them from losing records to division championships.  But a lot of the other information gleaned in this memoir - it was all new to me.  Here is my review of "Davey Johnson" 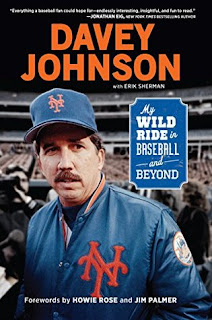 Title/Author:
”Davey Johnson: My Wild Ride in Baseball and Beyond” by Davey Johnson with Erik Sherman
Tags:
Baseball, professional, memoir, Orioles, Mets, Phillies Reds, Nationals
Publish date:
May 15, 2018
Length:
384 pages
Rating:
4 of 5 stars (very good)
Review:
Having found success as both a player and a manager, it is no surprise that Davey Johnson wanted to share his baseball experiences in a memoir.  What was surprising about this book written with Erik Sherman is that Johnson was using sabermetrics long before computers were used widely, before Bill James published his books and well before the current use of advanced statistics done by every team today.
That is only one of the several surprises in store for the reader of this book. Johnson states in the book that when he was playing second base for the Baltimore Orioles, he created a report of all possible lineups for the Orioles in 1969, writing punch cards and inputting data from the 1968 season.  Johnson did this for a computer class he was taking at Johns Hopkins university. This would certainly aid him later on when he became a manager.
Here’s another surprise in the book, at least for me. While Johnson isn’t unique in his belief that the best managers are those who “handle the bullpen and the bench because that’s the deal”, this statement took me by surprise because every team he managed, from the Mets during their championship season in 1986 to the Reds and Orioles in the mid 1990’s and later the Washington Nationals, his teams usually had stronger starting pitching and were loaded with offensive stars.  Knowing that he felt that managing the bench and bullpen made the difference took me by surprise, even though it makes sense.
One other surprise, again at least to this reader although some others may already know this, was Johnson’s viewpoint that some of the rule changes or proposals such as instant reply challenges, robots calling balls and strikes, or the new rules for sliding into second base, are bad for the game.  He believes that these make the sport “not even the game of baseball anymore. It’s terrible.”  Johnson is far from the only baseball person who believes this, but it was information I learned from this book.
There are many other tidbits of information throughout the book that may be new to readers. Some are serious, some are humorous, but all of them contribute to the overall picture Johnson wants to paint of his time in baseball.  One of them that I have never heard before was that Hall of Fame Orioles pitcher Jim Palmer had the nickname “Cakes” given to him by Orioles teammates because he always ate pancakes on the days he pitched. Of course, Johnson added that “Cakes” also got under the skin of teammates as well, something that wasn’t as obscure as the nickname.
The part of his career that gets the most pages in the book is his time managing the New York Mets and their 1986 championship season. This part was another viewpoint of that team and some of the incidents and highlights of that team and that year. I found his reflections on the seasons AFTER 1986 and the actions of the Mets front office more interesting, especially when a popular topic that is still talked about today is why that team didn’t win more titles.
This isn’t to say that the rest of Johnson’s career, both as a player and as a manger, isn’t discussed thoroughly – in fact, I enjoyed his discussion about his playing days with the Orioles and the Atlanta Braves as it was very interesting to me.  It is often forgotten that he set the record for most home runs by a second baseman when he was playing with the Braves in 1973. He also talks about the night Hank Aaron broke Babe Ruth’s record, as he was the hitter in the hole when Aaron hit the historic blast.
While this baseball memoir does read like many others, it was a good read for me as it was full of information about Johnson that I did not know, especially when the topics were when he was managing teams other than the Mets. I would recommend this book for most baseball fans as there is a lot of ground covered and it is sprinkled with humor throughout.
Book Format Read:
E-book (Kindle)
Buying Links:
https://www.amazon.com/gp/product/B079J6Q573/ref=x_gr_w_glide_bb?ie=UTF8&tag=x_gr_w_glide_bb-20&linkCode=as2&camp=1789&creative=9325&creativeASIN=B079J6Q573&SubscriptionId=1MGPYB6YW3HWK55XCGG2
https://www.barnesandnoble.com/w/davey-johnson-davey-johnson/1127073134;jsessionid=911538211DEE997616C9D88181C834EE.prodny_store01-atgap03?ean=9781629374116&st=AFF&2sid=Goodreads,%20Inc_2227948_NA&sourceId=AFFGoodreads,%20Inc#/