Review of "The Integration of the Pacific Coast League"

Sometimes a rain delay can be a good thing when you are at the ballpark.  I was at the Oakland-Yankees game yesterday in which the start of the game was delayed by rain for 2 hours and 45 minutes.  It gave me time to read - which was a good thing because I read this entire book during that rain delay.  Here is my review of "The Integration of the Pacific Coast League" 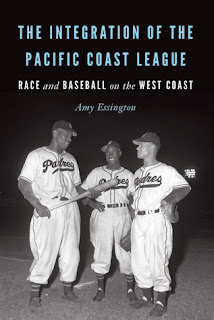 Title/Author:
“The Integration of the Pacific Coast League: Race and Baseball on the West Coast” by Amy Essington


Review:
It is well known that Jackie Robinson broke the color barrier in Major League Baseball in 1947, and that it took several years for the entire sport to become integrated. However, the pace of integration occurred earlier and faster in several minor leagues.  The Pacific Coast League (PCL), which at the time was the highest level of baseball west of the Mississippi River, did integrate faster and the story behind the integration of the league is told in this book by Amy Essington.


She notes that the PCL took only five seasons, from 1948 to 1952, to have all its teams integrated as opposed to the thirteen seasons it took Major League Baseball to accomplish the same feat. There is significant space devoted to John Ritchey, the first black player to play in the league when he appeared for the San Diego Padres in 1948, including an entire chapter.  His story is probably the closest to a “story” that is portrayed in the book as the book is more of a listing of facts about the integration of each team in the league and who the important people were – not just the players, but who the owners and managers were that allowed for the integration to take place.


While this may sound like the book is dry, it is not completely so.  In addition to Ritchey’s story, there are some other tidbits about the PCL’s integration that may pique a reader’s interest, especially if he or she is a baseball historian.  For example, in the PCL as well as many other minor leagues, exclusion was based primarily on the darkness of one’s skin, not necessarily race. There were players from Latin American or Hawaiian backgrounds who were not white, but because their skin tone was lighter, they were deemed acceptable to play. This is further muddied by the exclusion of others of the same background but because their skin was darker, they could not play.

Another fact mentioned in the book, albeit briefly, that can seem puzzling is the attitude of San Francisco Seals manager Lefty O’Doul.  At the time that integration was taking place in the PCL, O’Doul was becoming the unofficial American ambassador to Japanese baseball, with barnstorming tours to Japan with American teams. But when it came to allowing black players on his Seals teams, he supposedly was very adamant that they would not play for San Francisco.  While this only was mentioned briefly, I found it interesting because of O’Doul’s work with Japanese baseball.


Because of these types of findings, the book saved itself from becoming simply a reference book or textbook of facts and was worth the time to read.  At 192 pages including endnotes and bibliography, it is a very quick read and one that baseball historians will want to consider adding to their libraries.